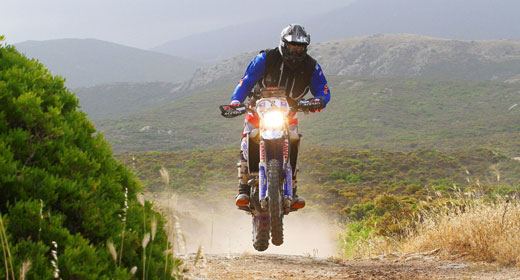 Alessandro Botturi gets rid of the uncertainties of his youth “Pilot Career” and fits better and better to the target. Here is the “bulletin” of his professional evolution on June 2nd, 2013. He wins the first of the two selective sections of the day, in front of Coma and Viladoms. He is “only” second at the end of the second special test, behind fellow Spaniard Joan Pedrero and in front of the myth Cyril Despres. Upon arrival of Torre di Chia, Dr. Alexander Botturi wins the stage and leaps in the head of the overall standings. That’s it, you’re there that you prepare yourself mentally to an expected development of the Rally, in this case looking at the renewal of the Marc Coma-Cyril Despres duel, and the discover that the battle has expanded by including the Italian Giant among its protagonists. With the arrival of the “Beast of Lumezzane” the first line of the Sardinia Rally Race becomes incandescent, or, following a more coherent terminology, magnificent!

The second stage lead from Arborea to Chia. It was three hundred KMs of difficult slopes, mostly very technical in the mountains of the mining area of the Sulcis. A few kilometers as the crow flies that can take away an eternity on the long snakes of switchbacks. Needless to say, the navigation becomes “unbearable.” How it works. High grass is very green and has covered the earth’s crust of the Island, and what’s underneath disappears from view. Botturi says that the Riders have to runs almost without seeing where they puts the wheels. To solve the puzzle conveniently, which would otherwise cost you a lowering of the average speed, there is the Road Book. It is necessary that the “Book of the Route” is incredibly detailed, and it is also essential that the pilots can blindly trust its accuracy. That’s what happens in Sardinia, where the World Championship becomes the university of navigation.

As we said above, and one of the key themes of this year’s competitions, Sardegna Rally Race is the renewed duel between Coma and Despres, led to a higher level. The battle is now more complete, and motivation has increased. On the day of Botturi’s victory the “clash” between the two axes is still live. Marc Coma may well be happy with the result, and even more the way in which the Spaniard got it. Leving at first from Arborea, the Catalan, who had to face a whole day of “scout” job, did not made a single mistake, and never has been achieved by the pursuers. Coma passes in second place, half a minute from the new leader, Botturi, but has centered the goal to contain the deficit in order to be able to come back to the leadershipin the third leg, back to Arborea on a different track.

For his part Cyril Despres runs fast on the route of adaptation to the new bike. He likes his new Yamaha, it is clear, and the feeling is growing day by day. Fourth and third, respectively, in the two special todays tests, Despres remains third in the standings, perfectly aligned to the subject. And who knows what could be a “good result” for a champion accustomed to winning …

Maybe we will see that at the end of the marathon stage, the second and the third without the possibility of intermediate assistance at the end of the day. Maybe the situation will be a little clearer. But the ‘”clue” that emerged from the evolution of this initial edition of the Sardinia Rally Race Rally still indicates that the Rally will be very uncertain and indefinable until the end. 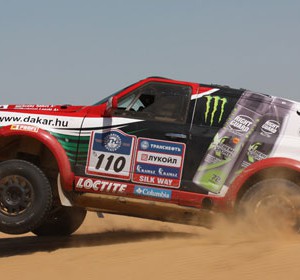 In 2012, Balazs Szalay and Laszlo Bunkoczi accomplished one of their dreams and more so… The Opel crew finished runner-up...
Copyright 2011-2016 Rallyraid.net - RISE Network. All Right Reserved.
Back to top