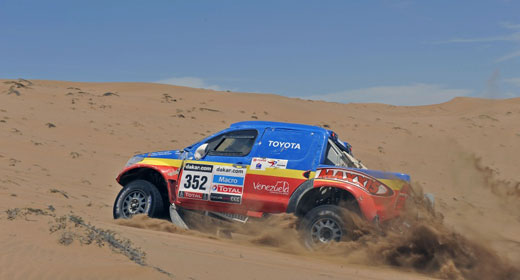 Belgium-based Overdrive Racing will field three Toyota Hiluxes in this weekend’s Baja Aragon, one of the most popular cross-country events in the world that is celebrating its 30th anniversary and will host the fourth round of the 2013 FIA World Cup for Cross-Country Rallies on July 19-21.

The Venezuelan driver Nunzio Coffaro leads the way in his Team Azimut Toyota alongside co-driver Daniel Meneses. The South Americans finished 20th overall with the Overdrive team in the Dakar Rally and Coffaro currently holds fifth position in the FIA World Cup drivers’ points standings after finishing ninth in the Italian Baja, 12th in the Abu Dhabi Desert Challenge and a superb third in Qatar’s Sealine Cross-Country Rally.

The Russian duo of Leonid Ogorodnikov and Anton Nikolaev drive the second T1 Toyota Hilux and the Polish pairing of Martin Kaczmarski and Bartlomiej Boba drive the third Lotto-backed car. 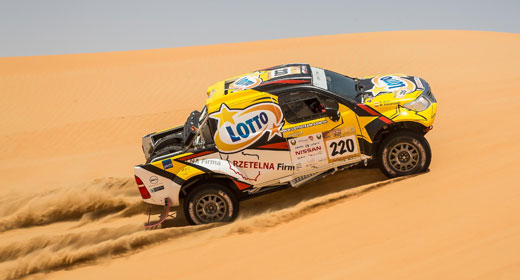 Ogorodnikov was seventh in the gruelling Abu Dhabi event across the remote Rub Al-Khali in the UAE, while Kaczmarksi finished ninth in Abu Dhabi but illness cost him a top result in Qatar, although he did recover enough to complete the final selective section.

“It’s a very busy time for the whole team, what with bring five cars to the finish of the Silk Way Rally in the top 10 last week and now entering three cars in Spain this weekend,” said Overdrive team manager Jean-Marc Fortin. “It goes to show the strength in depth of our entire team and the competitiveness of our Toyota Hiluxes.”

Administration and technical checks for the 30th Baja Aragon take place on Thursday (July 18th) and Friday, July 19th, before the competitive action gets underway on Friday afternoon with a short opening super special stage.

There are two timed selective sections on Saturday through remote Spanish countryside and a further pair on Sunday before the ceremonial finish in Teruel, the capital of Teruel province in Aragon, on Sunday afternoon. 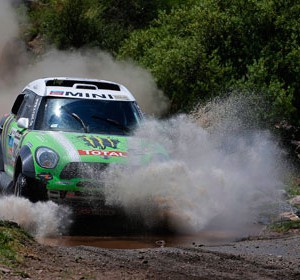 The Monster Energy X-raid Team has to cope with a tight schedule, now. Just a few days after the Baja Spain which will take...
Copyright 2011-2016 Rallyraid.net - RISE Network. All Right Reserved.
Back to top