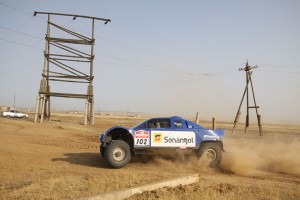 The Silk Way Rally made its return trip to Astrakhan and this morning the co-drivers were put to the test. At half-distance, the tracks were faster and the landscape more arid. Towards the end of the stage, the route headed south towards the Caspian Sea and the rally entered a huge sand sector with dunes to overcome.

The race for the overall lead became an old fashion western shootout between the leader Vladimir Vasilyev (G-Force) and the contender Jean-Louis Schlesser (Schlesser Original). The lead changed from one CP to the next. While the shootout for first place was going on, Evgeniy Firsov (Toyota Overdive) and Andrey Dmitriev (Nartime) were also on the charge. Just when the suspense was at its zenith, many front-runners had to search for the way-point. Schlesser used his guile and experience to test best time, nearly 12-minutes quicker than Firsov and more than 25 on Vasilyev, who is now in second place

Upon arriving at the bivouac, Schlesser good naturally splashed Ayrat Mardeev (Kamaz) with a bottle of water. “We battled for a long time and it was very amusing,” said the Frenchman. “Early in the stage, I was driving in the dust of Malysz (Toyota Overdrive) and the sentinel didn’t work and we stayed behind him for 80kms. Then we overtook Dmitriev (Andrey) and then towards the end of the stage we struggled to find the way-point. It was lucky that I insisted to head in a certain direction and we managed to find it. “

Firsov and Filatov (Toyota Overdrive) finished runner-up and moved up to third in the general classifications. “I am starting to feel comfortable with my Toyota Overdrive”, said the Russian driver, while holding a glass of a local drink, Kvac. “Today, was like having a pic-nic at my country house. Having said, we sweated a lot in the final portion because it was not easy to find our route. Several times, we took the wrong track and we had to cut the tracks and we made a mistake because we both looked at two helicopters…we drove all over the place in the dunes to find the way out.” 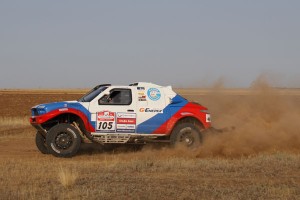 y’s big loser was former overall leader, Vasilyev who fought the good fight with Schlesser but is now 25’26 behind the Frenchman. After a calming shower, the Russian explained what took place with a smile on his face. “I got lost!” I looked for the way-point for more than 15 minutes, I began to get frustrated and off course, I drove too hard and broke the suspension, which cost us even more time. It will not be easy, despite his obvious talent, to make up the difference to Schlesser in 490kms but a race is never over until the final metre has been completed.”

Fourth place went to Christian Lavieille (Proto Dessoude) who is pleased with the performance of his Juke Buggy. «It was a fine stage and we ran really well, » said Lavielle. “But at the end we searched or the way-point and lost a lot of time, which is a shame, because we could have loved up the general classification.”

Dmitriev too had a long day after his first problem-free stage of the event yesterday. The Russian rolled his Nissan but managed to make it to the bivouac.

It was the scenario for Adam Malysz and Rafal Marton (Toyota Overdrive), who, since the start of the rally were on top form and in the hunt for a podium result. A shame for the former World and Olympic Ski Jumping Word champion, who’s SWR comes to a premature end. 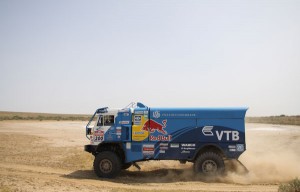 In the truck category, Edourd Nikolaev (Kamaz) took the victory. “It was an interesting day and we had no problems, except at the end…when we got lost. The special stage was fast and very hard to navigate.”

Overall leader Ayrat Mardeev (Kamaz) finished behind team-mate Nikolaev and can rest at ease as he has a two-hour, 27-minute lead in the general classification.

«Everything worked very well today, I slowed down a little bit but in the final kilometres, we got lost like everyone else, said the Kamaz star. “After turning a bit, we were the first team to find the right track. Schlesser also found it and we ran together. Heading to the finish, we had a puncture, which we changed on the liaison sector. We don’t know if it is an issue with the truck or the tyres. No matter, it was a much easier day than we had two years ago!”_
Stage also marked the end of the SWR for Ales Loprais (Tatra), who stopped at km 111 with a broken radiator mount. 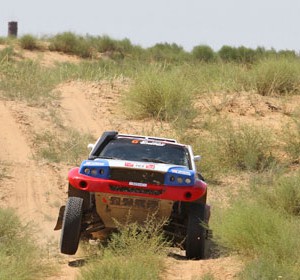 The Silk Way Rally changed direction on Wednesday, heading west into the tiny independent and Buddhist Republic of Kalmykia....
Copyright 2011-2016 Rallyraid.net - RISE Network. All Right Reserved.
Back to top