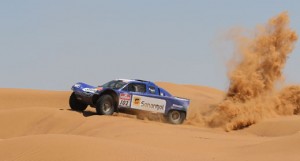 Direction south…The Silk Way Rally headed south from Volgograd to the world’s caviar capital, along the Volga delta to Astrakhan and the Caspian Sea. The special stage began at the Khazar Steppe, known for its desert plateau home to nomadic peoples. Further into the timed sector, the Berguin Erg was to be passed as well as the legendary Scorpion Erg in unbearable temperatures, easily surpassing 40°.

The 486km long stage was a struggle for many of the participants, but Jean-Louis Schlesser put in an error free day to set best time and move into second position in the overall standings.

«I was stuck behind Mardeev for a long time early in the stage, » commented the French veteran. “It wasn’t his fault but he was fast and I couldn’t get close enough for the sentinel to sound. When I was finally able to signal him, he immediately moved over to let us by, which we greatly appreciated. We ran alone and I could see the dust form Gadasin’s car. He then stopped with a mechanical problem. We then caught up to Vasilyev in the first of the dunes and Gache in the second section…and we ran together just until the end. It was a really nice stage but it was very, very hot!” 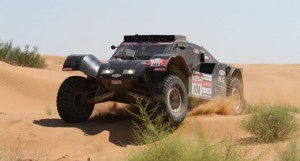 Philippe Gache and Jean-Pierre Garcin were slowed by a puncture but managed to finish second and retake the overall lead. “We had a right rear puncture caused by the heat, said Philippe Gache. “We lost the advantage we manage to build this morning. But the car was really good despite the extreme conditions, which is very important for us.”

Former World and Olympic Ski Jumping champion, Adam Malysz showed great promise in his reconversion as a motor racing drive. “The heat made it a very long and hard stage”, said Malysz. “I really liked the opening 250kms, but in was very hard, narrow, twisty and hot in the dunes! It was so hot I could not rest my foot on the floorboard. Early in the stage we had a flat tyre on the very bumpy surface where we bounded from one jump to the next.”_

Vladimir Vasilyev had a less than ideal run and finished more than 33 minutes adrift of Schlesser. “I had to stop for at least 26 minutes, due to a vapor lock issue due to overheating and we also had a fuel pump problem. It was frustrating but I got to watch a fantastic battle between Schlesser and Gache. It was fantastic! Schlesser passed Gache in the sand and Gache re-passed on the track, it was amazing!”

Fifth place was taken by the second Overdrive Toyota of the Russian duo Evgeniy Firsov and Vadim Filatov. “It was really hard today, said Firsov. “I had the impression that we would never stop jumping and it was so hot that several teams stopped in the stage. Thanks to that and the car we managed to finish second among the Russian entries.”
Two of the other Toyota Overdrives were not as fortunate: Marek Dabrowski had to slow his pace after overheating and Aidyn Rhakhimbayev had to stop to make repairs after an incident. 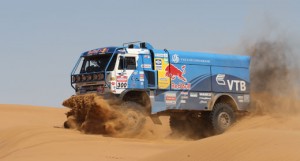 In the truck category, Nikolaev (Kamaz) set bet time of the day, however the n°303 team stopped on the liaison section prior to starting the stage to repair a mechanical problem. They entered the stage 2h25′ after their scheduled start time. While the Russian trio will get credit for the stage victory, they have been handed a 2h25’ penalty in the overall classifications. Ayrat Mardeev finished runner-up at 8’48, followed by Siarhey Viazovich (Maz) from Belarus at 32’14.

Yesterday’s winner among the big rigs, Andrey Karginov (Kamaz) suffered a blown engine and retired but he did manage to help team-mate Shibanov in giving him his universal joints to help with Shibanov who had suspension issues. In return Shibanov lent a hand to tow Karginov to the tarmac before continuing his own race. 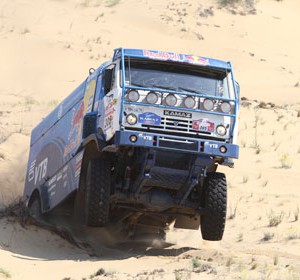 Yesterday, the young Andrey Karginov had his share of problems and this morning he started in 9th place. But oh what a difference...
Copyright 2011-2016 Rallyraid.net - RISE Network. All Right Reserved.
Back to top