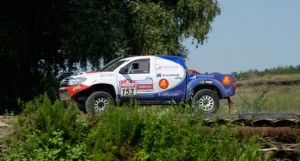 Among the Russian racing drivers Pavel Loginov and Oleg Tyupenkin are well-known as the pilot and the navigator having behind shoulders a wealth of experience of participation in various rally-raid competitions and marathons. Before the start of “Silk Way Rally 2013” these two guys worked in different crews, but the fifth edition of the Rally joined Loginov and Tyupenkin, having received one most stable “duo” of race!

Having passed seven days of race which were filled with speed, adventures, various difficulties and rather extreme conditions, the 4RALLY’s crew won first place in T1 diesel category pilot and took “gold” cup in national championship in “Raid-Sport”.

It was possible to subdue new height step by step, using competent tactics and avoiding mistakes. Loginov/Tyupenkin appeared on the finish among 39 cars which have reached the treasured finish in Astrakhan and that is important, among the crews which haven’t received a multi-hours penalization! 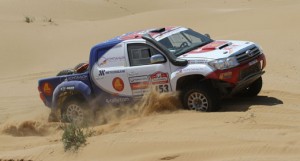 Having traditionally started from Red Square, the caravan of rally headed for Volgograd! Exactly there the first fights of race were developed. Beautiful sites of the savanna roads winding along twisting small rivers, fields and meadows alternated with serious Archedinsky sands and artful navigation traps. Having taken good speed, Pavel Loginov brought the Toyota Hilux at once into the top-20 after the first two stages of race, having shown the good potential of crew and the car, well prepared by Spanish 4WD Jaton Racing.

“Day was very difficult – from start before arrival we spent for a bivouac 9,5 hours” – noted Loginov on the finish of a loop stage in Volgograd. – Very viscous sand, paths with a track after passing of trucks were hard for us”.

For the third day of rally the crew Loginov / Tyupenkin rose in total classification on three positions and received a gold cup at a stage of the championship of Russia, passed in a framework of the first three days of “Silk Way Rally”. 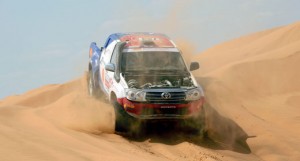 “For 486 km of a special stage, and I don’t remember when I was so tired – Loginov told. The first half of special were fast and we went 130-140 km/h, very fine. Then in sands – were quite difficult, viscous, but  the clutch began to revolve, and we reduced speed. Character of the route was replaced on trial, went as on a small roller coaster therefore against technical problems it was hard to reach the finish. It is very pleasant that we won category in “Raid Sports” and catch-up some more positions in the general ranking”.

In the second half of race clutch was working bad two days more, but skill of the pilot and the navigator allowed to minimize losses of time and to improve result. Before final day of rally Loginov / Tyupenkin were fixed on the 12th position in the general ranking, having kept it on the finish “Silk Way Rally 2013” in Astrakhan.

Having received from hands of the director of rally  Simeon Yakubov a gold trophy “Silk Way Rally 2013” for a victory in T1 diesel class, Pavel and Oleg were completely satisfied with the performance. 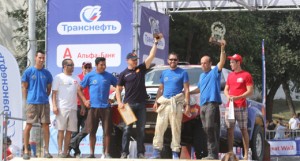 Pavel Loginov: “Race was very difficult and wearisome. I think, it was the most difficult “Silk Way” among all five in which I participated. I am totally satisfied with race, the route, crew and the team. For this release of “Silk Way Rally 2013” it was succeeded to assemble the whole cluster of prizes: we won “Raid sport” category in the Championship of Russia, and the most important, won a first place in a diesel class in the overall standing. For me this is very serious achievement. We slightly didn’t hold on to top-10 because of clutch problems. Nevertheless, this is what to aspire the next year. In further plans – participation in Morocco Rally and maybe, in a marathon “Dakar”!

Oleg Tyupenkin: “Navigation was pleasant to me; the road book was made well. Race turned out long, heavy, and the temperature barrier demanded very serious physical endurance. Even on “Dakar” there isn’t  so difficult! “. 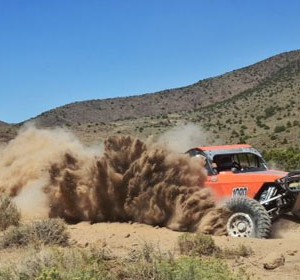 At the end of the second leg of the American stage of the Dakar Challenge, Peter Hajas has proven to be the most consistent...
Copyright 2011-2016 Rallyraid.net - RISE Network. All Right Reserved.
Back to top