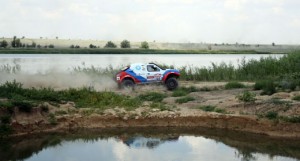 The Volgograd loop featured very little liaison sections. Five short kilometres in the morning before the opening 333km timed sector, then 44 more before the afternoon 145km run and the final 18 to return to the bivouac.

The sun was already shining and temperatures were on the rise early on over Volgograd, which this year is celebrating the 70th anniversary of the legendary Battle of Stalingrad. And it didn’t take long for things to heat up on the 546km stage.. After just a few kilometres a large number of leaders lost their way and precious time, before getting back on course. The second leg of today’s action was run compact and very fast surface.

The Russian team of Vladimir Vasilyev and Vitaliy Yevtekhov set best time in the classic Russian terrain, where several minor tracks and vegetation made navigation a very tall order.

When asked if they got lost, Vasilyev laughingly answered “Lost? Yes, we got lost like everyone else,” said the day’s hero. “But I soon saw that the Kamazs found the right track and we followed them. Afterwards, it was hard to overtake Gache and Schlesser, who were ahead of us, but we took a few chances! The second special section was very fast and we gave it all we had to win this special stage and take the overall lead.”

Second best on the day, Philippe Gache and Jean-Pierre Garcin (SMG Buggy) also navigated very well in the trickier portions. “We made a mistake early on, but we soon found the proper track,” said the SMG boss. “We spent a long time first in the stage but in a village there was a 30km/h speed control zone and we missed a junction. The time it took to make a u-turn, a Kamaz passed in front of us. Later, he stopped and we were able to get out from behind his dust…”

Behind Boris Gadasin and Aleksei Kuzmich (GForce Proto Evo Mk2) – who finished third but arrived at the bivouac with an alternator problem – Jean-Louis Schlesser (Schlesser Original) who is a rally-raid veteran was impressed by the length and the heat featured in Tuesday action. _“The navigation was very difficult right from the start and even in the dunes where we had to search for the waypoint_”, said the Frenchman.

Christian Lavieille bounced back from his misfortune from the day before to set best time on the morning section and finish fifth. “We did a good job finding our way, because I remembered certain areas”, said Lavielle. “Navigation was very hard but Jean-Michel (Polato) did a great job. The sand was very soft in the small dunes but once we got out, we had to pay attention to the bowl sections. It was a nice stage and a great day of rally-raiding!”

The Hungarian duo of Balazs Szalay and Laszlo Bunkoczi (Opel Mokka) finished seventh and both were black faced due to a blocked vent in their Opel, which allowed dust to enter the cockpit. Next was the Polish pair of Marek Dabrowski and Jacek Czachor ‘Overdrive Toyota Hilux), who got a taste of what it is like to raid on four wheels after so many years on two. « I really liked it, » said Marek Dabrowski. It was a lot of fun to be in a car in the sand and the Overdrive Toyota is really a great car that is both powerful and agile. It was a beautiful stage but very difficult to navigate! »
A third Overdrive Toyota, with Russians Evgeniy Firsov and Vadim Filatov, placed ninth, ahead of Laurent Fouquet and Bruno Bouey in a Proto Sodicars. 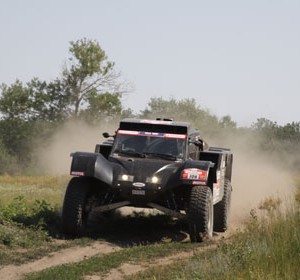 It was an early wake-up call for the competitors of edition five of the Silk Way Rally. The first car left the Tambov bivouac...
Copyright 2011-2016 Rallyraid.net - RISE Network. All Right Reserved.
Back to top