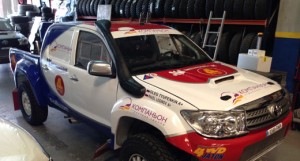 Spaniard team 4WD Jaton Racing will participate in Russian SILK WAY RALLY 2013 with four cars and an international staff. Russians, Germans and Argentineans pilots and co-pilots are represented in team entry list of the 5th edition of Silk Way Rally 2013.

Two TOYOTA Hilux EvoIV will be driven by Russian pairings. First one is duo Pavel Loginov/Oleg Tyupenkin named as team 4RALLY, well-known as a partner of 4WD JR. Two times in Morocco Rally 2011 and Silk Way Rally 2012 Pavel Loginov used to run the Toyota Hilux rented from Jaton Racing. This year Pavel is going to fight for a top-10 of the Silk Way Rally 2013.

«I have raced in every Silk Way Rally », says Pavel Loginov, and I am sure this rally, like every year, will be one of the best in terms of organization and difficulty. It will be a new challenge for me this year because Oleg Tyupenkin will be my co-driver, which is a tremendous honor for me.

Oleg has a lot of experience when it comes to world-class rally-raids. He has navigated for many famous drivers and for the best teams. I am sure that our partnership will be bring me invaluable experience. We are going to try to put in strong results and finish in the top ten and for sure, enjoy the race as much as possible. »

«The Spaniards 4WD Jaton Racing have excellent cars and we have confidence in them», declares Loginov. «This year we will race a Toyota Hilux that has improved electronics and suspension. This should allow us to compete with the top cars in our category. » 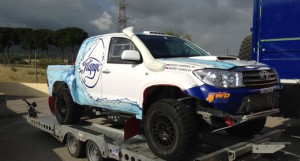 Second Russian crew in team 4WD Jaton Racing is Andrey Ivanov/Sergey Skripka. Both have a good level of driving and navigation experience, but promised to be careful on their way to the finish of the debuting start in Silk Way Rally 2013.

“I am happy with our debut in Silk Way Rally 2013. This event has a high-level of organization, route and logistic and the main goal for the first time here will be to reach finish and enjoy each day of racing” – said Andrey Ivanov.

From Germany arrives the third duo. Steffi Mans will return to the Silk Way with one of the recently updated Toyota Hilux Evo IV from the Spanish team 4WD Jaton Racing. Steffi’s unit has adopted new updates in electronics and suspensions. One more time the co-driver will be Benni Zirbus. The German pair has achieved a good result this year in Abu Dhabi and they want to continue the progression in Russia.

It will be the first Silk Way Rally for Eduardo Amor, the Argentinian has competed in the last four Dakar rally in South America and several races in his country Argentina. But he never takes part in a race outside the American continent. Eduardo Amor is a businessman and he loves extreme experiences. Amor’s co-driver will be Edu Blanco, one of the founders of 4WD Jaton Racing in Spain.

“This will be my first Silk Way Rally and I’m excited with this new challenge. I’m highly motivated and my goal is finishing the rally and if I can reach a good position will be very good.” said Eduardo Amor 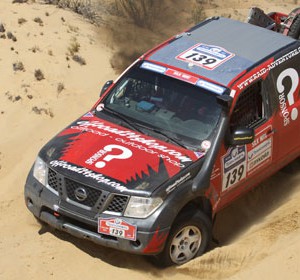 As the summer is approaching a new edition of Silk Way Rally is knocking on the door. Like in previous two years a Raid Adventure...
Copyright 2011-2016 Rallyraid.net - RISE Network. All Right Reserved.
Back to top