It was an early wake-up call for the competitors of edition five of the Silk Way Rally. The first car left the Tambov bivouac at 6:30 for the first timed sector at 9:35. The first competitive kilometres were run on visible tracks and compact terrain. What was a pleasure at first became more challenging with complicated navigation. After a 50km liaison, the day’s second sector featured sand-covered tracks, wide-reaching landscapes. The route passed along nature reserves before heading to the Archeda dunes.

This year’s SWR promises to be a hot one and it has only just begun. 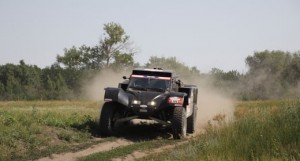 Philippe Gache was back behind the wheel to test his latest SMG Buggy. And the racer turned constructor showed he hasn’t lost any of his speed as he and co-driver Jean-Pierre Garcin claimed victory on the opening special stage of the 2013 Silk Way Rally.

«Obviously, I am very pleased with this result, » said Gache at the entry to the bivouac. This is meaningful because the car is very reliable. We set off 6th this morning and never committed an error thanks to Jean-Pierre’s very good navigation. We passed cars one after the other. It is a nice result but I haven’t forgotten that I am here to gather as much information as possible. I am not concerned where I finish. » 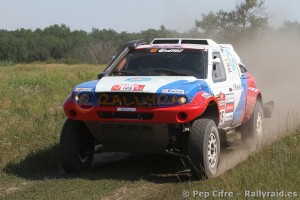 Vladimir Vasilyev also impressed, finishing 2’49 adrift of Gache in second position. “_There was a bit of sand, nice sandy tracks, quite a few fast sections but with a lot of dust,” said the Russian. The first sector was hard…I overtook Chabot. I made a navigation mistake in the second sector and Gache passed me…”_

Jean-Louis Schlesser finished a distant third to Gache and Garcin at 9’41. «_There was a lot of navigation, » said Schesser.. “I was stuck behind Gadasin for a long time in the first sector; from the 70km point just to the end. In sector two, I set of behind him and when he got lost, we ran our route. Later, I let Vasilyev and Gache go past…I did not want to take any chances in this first very hot day.”_

Boris Gadasin made a few minor errors, which resulted in 6th best time. “_I didn’t deflate the tyres enough and it was a bit had in the dunes,” said the 2012 SWR winner. “I forgot that the sand becomes soft when it is this hot…But the special stage was very nice.”_

Ninth place Ronan Chabot and Gilles Pillot also made a few faux pas. “The buggy is really good and we were able to catch up to the others in the opening sector, but I didn’t anticipate the changes to the road book. I went straight off and stalled the engine…Unfortunately, when the engine is hot we have a starter problem…We lost time working on the car then in the afternoon we suffered a puncture. Despite these minor setbacks, the car was lightening quick !” 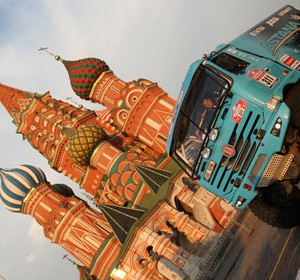 After the Friday evening festivities at Red Square, the 99 teams entered for the 5th edition of the Silk Way Rally drove...
Copyright 2011-2016 Rallyraid.net - RISE Network. All Right Reserved.
Back to top