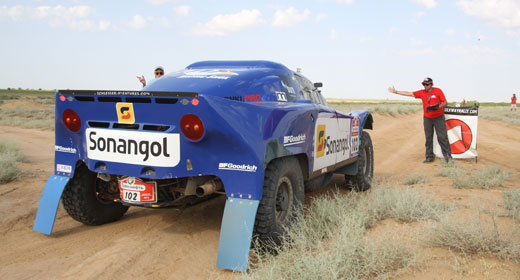 If the remaining competitors thought the final 87kms of timed sectors would be akin to the Sunday ride into Paris on the Tour de France, they were in for a rude awaking, because the final special stage was a microcosm of a world-class rally raid contest known as the Silk Way Rally.

Stifling heat, rough and rolling tracks, navigation followed by a panoramic view of the Volga River and then the final downhill sprint towards the Astrakhan podium. Edition five of the Silk Way Rally was one for the annals. Some had to dig their way out of the scorching sand with the arrival zone within their sight.

In the car category, Vladimir Vasilyev (G-Force) kept the pressure on overall leader Jean-Louis Schlesser (Schlesser Original), but the Frenchman is a salty veteran and controlled the situation from the front, dropping just 36 seconds. After a week-long, hammer and tong fight, Jean-Louis Schlesser and Konstantin Zhiltsov took the spoils. «I built this victory one day at a time, » said the Frenchman at the foot of the podium. «I had to stay in contact with the contenders and never lose my cool and take each stage as they came. I won stage two, and then we remained mindful and paid extra attention not to commit an error. The battle with Vasilyev was intense, it was a great fight. We won, because I am more experienced and have a faster car. I didn’t have a single problem with the buggy and even managed to test some parts. I am really proud of the preparation my mechanics did to the car. Personally, I found the special stages a little too long, because it was difficult to remain concentrated for 500kms with temperatures at more than 50° in the cockpit. But the terrain was fantastic. It reminded a lot of southern Morocco and Mauritania. The organizers did a first-rate job, everything was perfect and we ate well, which is important after expending so much energy during the day.”

Prior to striding the podium at the Astrakhan Kremlin, Schlesser the veteran met up with truck category winner Dmitry Sotnikov (Kamaz) and gave him a celebratory hug. 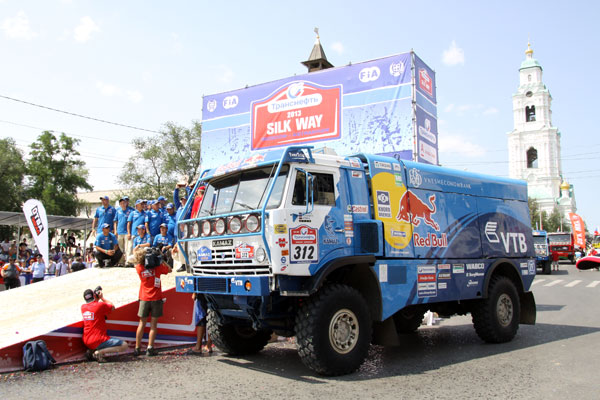 The 28-year old Sotnikov still can’t believe he took his first win with team-mates Viatcheslav Mizyukaev and Andrey Aferin. He could barely hold back the tears of joy. «_I have only been competing in rally-raid for two years and I never dreamed I would arrive in Astrakhan as the victor,” said the proud Russian._

«I was hired to drive the rapid assistance truck and carry parts for the other Kamaz entries, but last night, Ayrat (Mardeev), who had been the leader, received a two-hour penalty for missing a way-point. It was only then did I release I could win the race. Our team manager, (Vladimir) Chagin, told us it would be a hard day, but he did not employ team orders…there was a lot of pressure during the entire stage. Anton (Shibalov) was pushing hard and overtook us 20km from the finish…I knew we only had just over a minute lead and I really gave it all I had.”
This is my first solo triumph, because I shared the driving with Anton on the Africa Race. It is an immense surprise for me and extremely emotional! »

For SWR Director, Semen Yakubov, this year’s Silk Way Rally was a total success. “I am really pleased that so many well-known competitors take part in the SWR. Day after day, I saw smiling faces and it was truly touching. We try to put on a rally in the most African tradition, with long and demanding special stages and the competitors like that. I am honestly pleased Jean-Louis Schlesser and Dmitry Sotnikov won; it is a win for the veteran and the young. We are working on a new route, but today it is still a secret. I want to thank everyone ! »

Frédéric Lequien is just as satisfied. “For me, this was the best edition of all five with a route all the competitors complemented, “said SWR Deputy Director. “It was a proper rally-raid comprising long and difficult special stages but always offered the participants great pleasure. I will soon announce the dates and route for the next Silk Way Rally to the large rally-raid community. Bravo to all the competitors who gave it their all to make it to the finish line.” 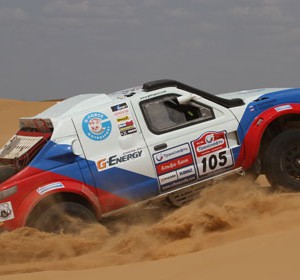 The sun was already beading down on Astrakhan when the first car took the start of the penultimate stage of the 2013 Silk...
Copyright 2011-2016 Rallyraid.net - RISE Network. All Right Reserved.
Back to top