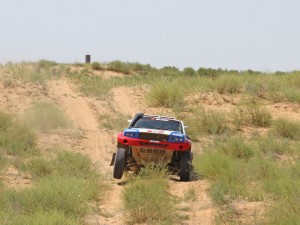 The Silk Way Rally changed direction on Wednesday, heading west into the tiny independent and Buddhist Republic of Kalmykia. The warm welcome received by the first drivers to arrive at the bivouac, Jean-Louis Schlesser and Adam Malysz was accompanied by a traditional head dress, silk scarves, a cup of local tea and other delights.

The SWR has been run in a veritable furnace with temperatures in excess of 40°. For safety reasons and to give the competitors some well-deserved rest, the organizers, decided to shorten the stage to 305.21kms, followed by a liaison section of 153kms, leading directly to the bivouac at Elista,

There was little movement early in the stage in the car category. Jean-Louis Schlesser (Schlesser Original) and Philippe Gache (SMG Buggy) battled before getting lost and thus losing time to the other contenders. While Schlesser completed the stage, Gache stopped at km184 with a broken gearbox. While this put a damper on what was to be a spirited fight for the win, for the SMG team boss it is mission accomplished. 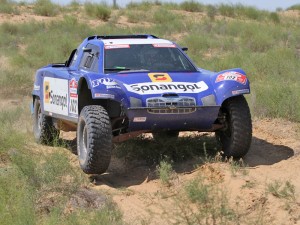 «The goal to gather as much information as possible on the lifespan of important elements in the buggy under extreme conditions was attained,” said Gache at the Elista bivouac. “We pushed certain parts to their limit and I am really happy because the buggy is very competitive. Nevertheless, I am disappointed because I was getting a taste for this race. The SWR is an exceptional rally with amazing stages and a fantastic organization.”

The two Frenchman who were the stars of the rally these past few days were upstaged by an SWR native son, Vladimir Vasilyev (GForce), winner of the Astrakhan – Elista test. “It was a fine day for us, despite losing sixth gear at km10”, said the Russian. “I saw Gache commit a navigation error, then, later Schlesser was stopped in the sand. Everything worked well for us, despite only having five gears and we are quite pleased with the result!” 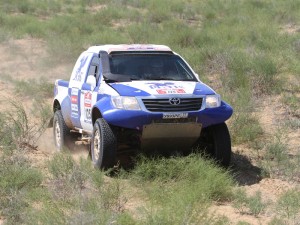 With the stage win, Vasilyev is the new leader of the rally with a 19 second lead over Schlesser, who finished fifth on the day. “Early on we were by ourselves, but I hit a solid sand bank and damaged the right-front wheel,” explained Schlesser. We lost a lot of time to change it but then we passed everyone, except Vasilyev.”

Another Russian, Evgeniy Firsov also stole the show, finishing second in the stage. “It was a perfect day for us,” said the Toyota Overdrive leader.. “We were also quite lucky because on occasion, my co-driver Vadim (Filatov) forgot to give me notes and three times we made some impressive jumps.”

Andrei Dmitriev (Nartime) completes the day four podium. “We started 25th this morning and early in the stage the wind was blowing dust everywhere and we overtook several cars,” commented Dmitriev. “Later, it became more difficult, especially passing the trucks. This was our first day without any mechanical issues and we finally had a good water thermos with us…these last few days we literally burned our tounges; that is how hot it has been. It was a little cooler today. For sure that is the reason we pushed to put in a good time.” 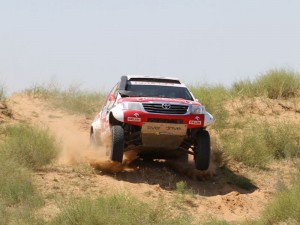 Adam Malysz ran a strong stage to finish fourth in his Toyota Overdrive. “I made a mistake at a junction,” says co-driver Rafal Marton, because my trip master scrolled too quickly. Obviously, I used the back-up but in the steppes, navigation was very complicated. It was a difficult but nice stage. »

Jérôme Pelichet and Eugénie Decré (Toyota Overdrive) finished seventh. “Everything went very well today, except for when I had to avoid a cow and the tyre came off the rim”, recounted Pelichet. “As for the rest, I am really happy.”

Former motorcycle racers Marek Dabrowski and Jacek Czachor made it four Toyota Overdrives in the top eight. “We got stuck in the sand once and lost time with a small navigation mistake,” commented Dabrowski. “It was a very nice stage but on the fast portions, I still lack experience, I didn’t dare attack…”

Alexander Nikonenko and Konstantin Mescheryakov (Crossover) finished ninth ahead of Christian Lavieille and Jean-Michel Polato (Proto Dessoude Buggy Juke). «Early on, the sand was so soft we had to deflate the tyres to 500 grams… Then, in the dunes we got stuck for ten minutes», lamented Lavieille. 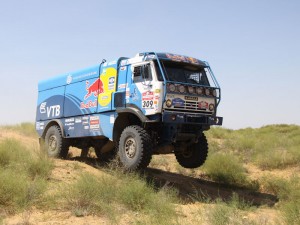 In the truck category, Anton Shibalov got a bit of revenge and set best time on the day. «It was a perfect day, especially after the universal joint problems we ad yesterday », said the Kamaz driver. We didn’t have any worries in the stage.”

Ales Loprais (Tatra) finally enjoyed a trouble-free day, setting second best time. « My baby was only born just four days ago, » said the Czech. « It still has some teething problems to overcome and that is why I am competing in the SWR. It is a fantastic rally to test on. Today we started 49th and finished in second place but we still have a lot of set-up changes on the suspension to make tonight… »

Edouard Nikolaev (Kamaz) rounded out the top three in the truck division
« We could have gotten lost more than once but my co-driver did a fantastic job with the navigation. We dropped 2’30 in the sand to inspect the truck but for us, the most important thing is to test the equipment. I am the thrilled to return to the Republic of Kalmykia because we are always greeted with a lot of hospitality, and the people here bring a lot of energy.”

Tomorrow, the Silk Way Rally returns to Astrakhan with a stage of 559 km. 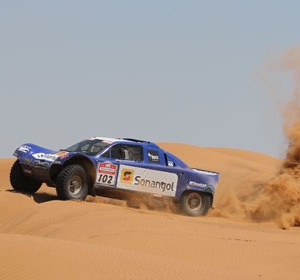 Direction south…The Silk Way Rally headed south from Volgograd to the world’s caviar capital, along the Volga delta to Astrakhan...
Copyright 2011-2016 Rallyraid.net - RISE Network. All Right Reserved.
Back to top