The rally includes some of the biggest names in Rally Raid: Peterhansel , Schlesser, De Villiers , Saby , Biason , Vigouroux, Ten Brinke … Who will be the best this year , inscribing his name in the history of the Rally ?

A epic battle is announced in this category. The team :Bernhard Ten Brinke / Matthew BAUMEL winners in 2011 of the OiLibya Rally of Morocco is looking to climb the top step of the podium this year at the wheel of their Mitsubishi prototype powered by Ford Wevers Sport Offroad . On the same team: WEVERS / LURQUIN and HUZINK / MAIMON, many distinguished Rally raid names that will shine here in Morocco.

The Armada of the X -Raid Team with 6 minis, fresh from a week of intensive testing is perfectly sharpened to embark on this new edition of the OiLibya Rally Morocco.
Renowned Teams: TERRANOVA / FIUZA , Garafulic / PICARD, Vasiliev / YEVTYEKHOV , SCHOTT / SCHMIDT, VILLAGRA / PEREZ and YACOPINI / Scopinaro are here to get on the top steps of the podium.

Other drivers of such notoriety as Matthias KAHLE (No. 307) and co-driver Patrick SIREYJOL – François Beguin of Team Cummins France – were given an appointment to fight it out on the sand slopes
The Italian team of Tecnosport , The Russian’s 4Rally team , the Portuguese team MRacing ,the Argentine team of 4WD Jaton Racing , Dutch Teams: Dakar team and VAN Eikeren Drive, the Kazakh teams Astana and Mobilex Racing Team as well as many french teams like : Cantal Event , Trio Racing Generation 4×4, Pirates des caraibes and, TGO have come complete with participants from the 4 corners of the world.

In the T3 category, the Xtreme Plus team is represented by Duclos / DELEAUNAY, WHITTLE / CONNELL and SEAIDAN / LUCHTLEUCHTER, current overall leader of the FIA World Cup in the category.

The 100% female team MERRY / MARCHAND of TGO and co-drivers SEGUIN Corinne and Christine FAVRE in the car category all here to compete with the men.

In OPEN class: The Predators of Bugg’Afrique, are back again in force to try to steal the podium. They will compete this year against the Jollycar team’s Porsche, the Isuzu and Toyotas

In SSV, the Polaris will be confronted with the Bombardier.

There is also a great battle brewing in the truck category with the usual competitors of the OiLibya Rally of Morocco with the very talented and Elisabete JACINTO teammates Marques / Cochinho who will try once again to win the Rally this year. The Mercedes of the Polish team DOMOWNIK / JANDROWICZ / SALETA could give a hard time to the Portuguese champions. Just as the three French participants: COQUELLE / BECART / LEFEVRE on Renault No. 402 who have been playing for years in the Moroccan dunes, or VAN Werven / Zuurmond / Wigman of the Dutch GINAF RALLY SERVICE.

Tomorrow Sunday, October 13th, all pilots and thrill seekers will come together in a relaxed atmosphere to go through their administrative and technical checks in Zagora, before donning their suits to jump in the first stage of the OiLybia Rally of Morocco this Monday, October 14th. 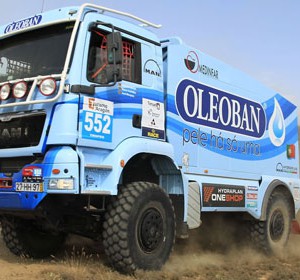 The team OLEOBAN®/MAN Portugal is counting down to the start of the 14th edition of the Rallye Oilibya du Maroc. The Portuguese...
Copyright 2011-2016 Rallyraid.net - RISE Network. All Right Reserved.
Back to top