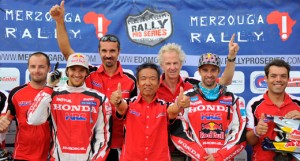 It was a spectacular start to the two African rallies with the new Honda CRF450 RALLY taking two consecutive victories, having won nine of the twelve stages disputed. Although it was just a week ago that Paulo Gonçalves won the Morocco Rally and the World Championship, it was the turn today of young British rider Sam Sunderland in the Merzouga Rally. This, of course, was the final test before TEAM HRC heads out to Argentina to confront its next challenge with the Honda CRF450 RALLY: the Dakar.

The final stage couldn’t have been more spectacular. The participants headed out in line from Erfoud and rode just a 72 kilometre route through the Erg Rissani and Erg Chebbi dunes, where the race came to its close. First across the line was Sam Sunderland, who picked up his second stage win, as well as becoming the overall race winner, after holding onto the lead from the third stage.

Not far behind was his TEAM HRC team-mate, Portuguese rider Hélder Rodrigues, who took second place, and thus the double for the team in their first Merzouga Rally outing.

Sam Sunderland: Yeah, it’s perfect. Just before the Dakar. It’s nice for confidence. The week went really well. The bike was flawless. The team did really well. Everybody was working together for the same thing and in the end we won. We came first and second. I’m really happy as it’s been a long time since I raced. To finish like this is the best it can be, just before the Dakar. I’ve a lot of confidence now. We’ve just got to keep working. It has proved that I’m moving in the right direction. The last two races we’ve come away with victory, it’s really important for the team spirit. I’m really happy to be winning.

Helder Rodrigues: I’m happy. I’ve finished second, but I won two stages, and Honda has won the race which is the important thing. The results are important, but also the teamwork. I rode well and I won two specials and the team has worked really well. The bikes running really well and we all come away more experienced. I’m happy for the team result and for having come out here.

Katsumi Yamazaki: We finished the sixth stage out here in Merzouga, and it’s been an extremely positive one for TEAM HRC. Sam Sunderland won today’s stage and the overall standings and Helder Rodrigues finished second. It’s perfect! We are ready for the Dakar. Thanks for your support.

Martino Bianchi: We’ve won the Merzouga Rally. It has been a really important test for us just two months before the Dakar. He have finished first and second with a great team effort.

It’s important for team-building and team-spirit, and is important as well for the mechanics who have been with us. The victory belongs to them too. 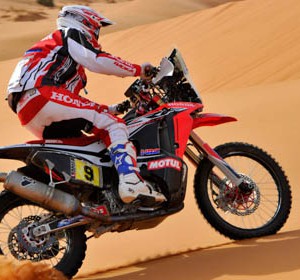 Sam Sunderland was outstanding in the third special of the rally. The British rider’s performance for TEAM HRC earns him top place...
Copyright 2011-2016 Rallyraid.net - RISE Network. All Right Reserved.
Back to top