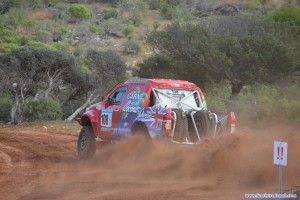 Giusy Concina, Australia._ There are 99 competitors at the start of Australasian Safari 2013, a really big adventure, nice and so interesting. Most of the crew are from Australia and New Zeland, but there are also several coming from ouside like United States, Europe, Japan. Beetween them there is also an italian: Giuliano Airlodi who started the race with a Polaris and french copilote Delaunaey.

Two day of scruteenering at the HQ located in Wanneroo, then the race started in the macigal landscape of Jurien Bay, where a 6,5km track on the beach established the start order for leg 1: from Northamton to Kalbarri. 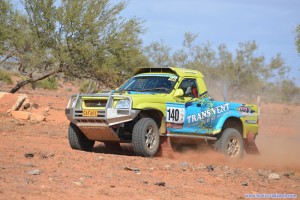 The first day, was a warm-up day with 270km dividen into 3 special stages: the winner of the day was McShane with his buggy Toyota engine, second the Toyota of Geoff Olholm. At the end of the day there was no cars and bikes missing in the classment, just some delay due to a lot of sand on the beach of the first special stage. From Kalbarri, along the National Park, the second leg was much more long with 550km, in 3 special stages, starting with a very short liason of 23 km, then one of 63 km along a really speedy and wonderful red piste, to reach Gascoyne Junction. The leg was so strong for the crews, with long pistes, lot of turns, several creeks and sandy creeks, so many canges at the general results. A bad day also for the italian Giuliano Airoldi, he broken the gearbox of his Polaris only 50km before the end of the last stage. 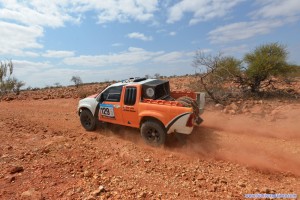 Day number 4: a different leg from the others, because is  “marathon”  – assistence only in the night at the end of all day stages, in Carnarvon. Two specials stages, one Mardathuna with 134km and Brick House with 156km, along a magical landscape, with a first part with lot of sand, several creek, very tricky, a seond part more stony, with some hills and Khyber Pass, and a beautiful flora, infact we are in Kennedy Ranges National Park. Following this race we get surprised by the beauty of the landscape, by how many animals ( kangaroos, emus, birds) we can see all around; but the big surprise i show easy is to run following the road-book ( really well done) into the Nationals Parks.

Australasian Safari is part of Dakar Challenge, so following “ Dakar Style” the leg number 5 is long 422km with 3 specials stages back to Carnavron: Barrabiddy Creek 200km, Gnaraloo 142km, Quobba 80km.  Leg number six go back to Kalbarri with sandy piste and a wonderful red color, for a total of 400km. The situation at top classment is not changed so much, infact the great pilot from Cairn Geoff Olholm with his Toyota Overdrive get a good gap from second position McShane with his buggy Toyota. During this leg we discover another interesting thingh about the race, infact to cross the big hiwghay 1 (asphalt road) the competitors must stop, give way to the normal traffic and cross slowly, by a neutralization of timing and a check point; this rule is for safety mandatory bu the police; and it works perfectly.

About safety we would like to mark how big work the organization do for all the race, the security level is really high, with 32 “Tango” vehicles along the race track, connected by a great guy “Safari Base” who made all the radio job, with also 2 planes in the air to cover all Western Australia Race track. “Tango” vehicles check the track, then there were the “Sweeper” cars and the “recovery” cars whom pick-up all the competitors with technical problems. At the en of each leg, all people is happy to be at bivuac with a beer and a really family and relax feeling.

Leg number 7, the last one, thakes alla people to Geraldton  for the beautiful end along the beach and the prize giving in the evening at the last bivuac. A really interesting race, that should be done, to understand well the beautiful feeling, and to see the magial landscape of Western Australia. The final results give the victory to Geoff Olholm with his Toyota Overdrive, a very big satistaction for the pilot and all team from Cairns.

Africa ECO Race: Reconnaissance for Rene Metge and his Team 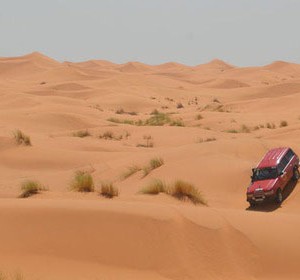 Africa ECO Race: Reconnaissance for Rene Metge and his Team

Since the beginning of September, Rene METGE and his team are in Africa in order to refine the route to Dakar and finalize...
Copyright 2011-2016 Rallyraid.net - RISE Network. All Right Reserved.
Back to top