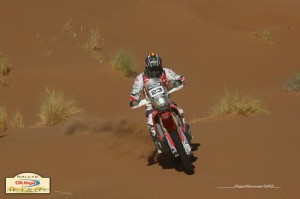 Competitors began this special with a fairly technical mountainous part, then headed for the dunes of the Erg Chegaga, where navigation was paramount . The key words were caution and attention! The arrival gave the impression of race pack. The first five left in the same order every 2 minutes and all arrived at the same time. The logical outcome: the top 5 of the day are the same as yesterday but in reverse order.

Joan BARREDA RALLY TEAM HONDA HRC No. 23 wins in 2h43’7 and 2’29 ahead of Chaleco LOPEZ KTM RED BULL RALLY No 4. The surprise of the day: Chilean Jeremias ISRAEL – ESQUERRE on his Speedbrain No. 39 in 3rd position. Surprising because he came in front of the Hondas and KTMs. However, He is closely followed by Sam SUNDERLAND HONDA HRC RALLY No 6 arrived just four seconds behind. Marc COMA KTM RED BULL RALLY No 1 is the fifth and Paulo GONCALVES HONDA HRC RALLY TEAM No 2 is sixth.. The five men are all in just over 14 minutes.

“It was amazing to open the track like that. It is a privilege that is offered to just one driver a day, and this is a great way to learn. Tracing is never easy but it is an obligatory stop when you want to be among the best. But the goal is not just being able to open the tracks, but to open to and keep ahead, faster than the others behind. So today I lost time but I’m progressing … “

” This is a very good day for me. This is my second victory in only three stages and the third for Honda. I discovered a high-performance motorcycle, which gives me a lot of satisfaction. Today, the pace was high and fast again, and it suited me perfectly. All this foreshadows good things for the future and boosts my confidence. “

Just like yesterday, the Bolivian Juan Carlos SALVATERRA on Speedbrain No. 72 coming 15th overall in stage 3 at M’hamid . And just like yesterday he’s the leader of the 450cc category. RECCHI (KTM n ° 74) is second and Polli (KTM 73) third.
SALVATERRA is still leading the overall category 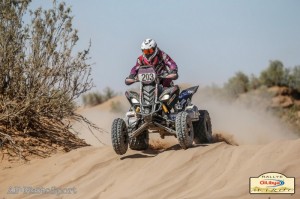 The Polish champion wins this new stage of the OiLybia Rally of Morocco on YAMAHA No. 200, followed by Camellia Liparoti YAMAHA No 203 determined to win a new title on Saturday in Erfoud . The unfortunate Mohamed Abou -Issa No. 201 fell at KM 95 of the special and could not finish the stage.

The Dutchman Robert VAN PELT – JUNIOR HONDA No 258 wins a third consecutive stage. He completed the day’s special in 3h27’53 and is followed by Russian NAUMOV (HUSQVARNA No. 266) and the Frenchman SCHIANO (SHERCO No. 255).
In the overall standings VAN PELT – JUNIOR ahead then SCHIANO then CHALVIN.
The Vincent ALBIRA No 270 on HONDA remains a strong leader and one step closer to a class victory. Alexander JONCHERE is second and Patrice GRUNEWALD No. 276 reaches the third place in the category followed by his two accomplices Claude MULLER No. 275 and No. 274 Vincent THOUVENOT. Which of these three friends who‘ve always ridden together will find themselves on the podium?