Barreda takes the Honda CRF450 RALLY to a third victory 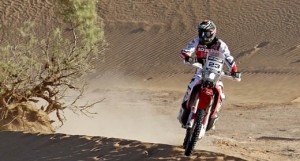 Three stages of the Morocco Rally completed, and three wins for the Honda CRF450 RALLY in the bag. Joan Barreda came in first today and retakes top-spot on the overall leaderboard. TEAM HRC team-mate Sam Sunderland ran the fourth fastest time and Paulo Gonçalves finished sixth and is second in the overall standings.

Joan ‘Bang Bang’ Barreda once again proves that he’s a force to be reckoned with. The Spanish rider appeared to be at ease even on such a navigationally tricky stage as today’s. Erg Cheggaga and Lago Iriki gave him the chance to really put the Honda CRF450 RALLY through its paces. The rider from Castellón thus takes back the top position on the leaderboard. British rider Sam Sunderland too, was pleased to be back in the dunes, finishing in a fine fourth position which keeps him in fifth overall place after three days of racing.

Portuguese Paulo Gonçalves had his work cut out as he started the special from the front, but in spite of this was able to finish in good sixth place. Gonçalves is now second in the overall standings.

TEAM HRC has once again kept its components up in the top eight overall positions, with Argentine Javier Pizzolito putting in a fine performance in eighth place and Hélder Rodrigues ninth, penalized with an fifteen place start after an electrical problem yesterday, which saw him forced to overtake various riders amidst the heavy dust that they were generating.

Joan Barreda – 1st – 2:43’57 – TEAM HRC: It’s incredible to get a third win for Honda in this rally. We are really pleased. Today has been a very important day for us and we’ve made up a lot of time. Especially for Paulo who had an excellent stage, and who’s doing extremely well looking to win the championship.

Sam Sunderland – 4th – +4’43 – TEAM HRC: It’s been a great day. Fortunately for me it was with the dunes which is what I like. There were some very fast zones and I had to be really careful in the last few kilometres, which were very dangerous with a lot of dust. The bike is going really well and I’m pleased as it’s getting better and better. This is very positive for the coming Dakar.

Paulo Goncalves – 6th – +7’44 – TEAM HRC: I’m very happy with today’s special. I opened the way for the whole day with 70 km off-road and 50 km of dunes, setting the pace with a good speed. Tomorrow will be a stage to try and make up some time. The bike has been incredible. I’ve been amazed at its performance in the race so far and it just keeps getting better and better.

Javier Pizzolito – 7th – +8’25 – TEAM HRC: It’s been a nice third stage, with a lot of sand and navigation, the way I like it. At first there was a lot of dust but I don’t think that it set me back very much. I had a good stage near Caselli and I think that it’s been good stage on the whole.

Helder Rodrigues – 8th – +8’27 – TEAM HRC: A very dusty, but a good stage. I started from behind and had to stay back there for about 50 km unable to overtake for all the dust. Later I picked up the pace a bit but I knew that I wouldn’t be able to do a very good special. Tomorrow I start from behind, but I’ll try and make up some time.

Sand, always sand for the most beautiful stage of the Rally. No crossing planned for this 4th stage, but a lot of navigation in an idyllic setting. Competitors will leave Zagora’s region to Erfoud, crossing beautiful tracks with heavy navigation. The highlight of this leg is the crossing of wonderful sandy passes. After crossing the road after CP3, competitors will climb to Erfoud where they will be able to admire the famous site where The Mummy movies were set. 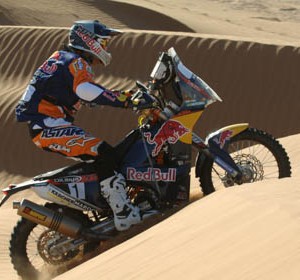