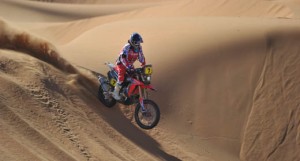 The success of TEAM HRC and their Honda CRF450 RALLY continues as the team commands more African raids. The second stage of the Merzouga Rally saw Helder Rodrigues and Sam Sunderland take the first two places in the stage, and likewise the top two positions in the overall standings.

In the short prologue stage of yesterday that opened the Merzouga Rally, both Helder Rodrigues and Sam Sunderland thought that it was preferable to start from further back on this the second day of racing. The rally itself was a long and technical ride with some truly tricky orientation points that really put the riders’ navigational skills to the test.

Portuguese rider Helder Rodrigues set off from 28th position this morning, and was able to get the best out of his Honda CRF450 RALLY against the clock in the 200 kilometres special. Finishing some two minutes ahead of TEAM HRC team-mate, Sam Sunderland. The British rider’s second place finish pays tribute to his continually improving navigational skills. Both riders are on top of the standings of the Merzouga Rally.

I feel great. It was a day of difficult navigation and picturesque tracks. I started out in twenty-eighth place and I pushed pretty hard until the refuelling. Once there, I was able to see that I had set a good time and from there on I tried to keep in control and not steer off the good track. It was a tough day for the navigation, with a lot of routes, tracks, rocks…. I very full-on day.

It was a good stage. Really very complicated as far as navigation went, and I had to really focus on the road-book. A lot of dust and a lot of sand, which was good, and on the whole I think that we did a good job. I’m pleased because we’ve been improving the navigation which keeps getting better and better. A good day and I’m happy to be up there at the top of the leader-board.

After a 3,43 km, both start and finish are located close to the famous Kasbah Said. This is the longest and most demanding stage of the rally. The competitors will reach the Erg Ouzina, passing through the mythical Erg Chebbi and the Erg Snagui. The hard terrain of the second part of the stage will allow the most technical riders to show their riding skills.

X-treme plus - Merzouga Rally: A hell of a first special!

After a 120 km of warm to regain the confidence with the African terrains, at 17:00 the 108 competitors of the Merzouga Rally...
Copyright 2011-2016 Rallyraid.net - RISE Network. All Right Reserved.
Back to top