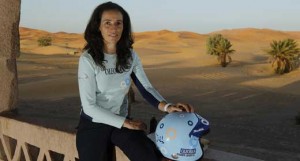 The team Oleoban ® / MAN Portugal underwent the technical and administrative checks for the Rallye Oilibya du Maroc 2013. For this edition of this great marathon the team was assigned with the number 400 since this year, and for the first time, the race organization, NPO, considered Elisabete Jacinto as a priority driver.
For this edition the major opponents of the Portuguese team, formed by Elisabete Jacinto , José Marques and Marco Cochinho, are the Dutch off the GINAF Rally Service team, which has two trucks entered, the German from the Team Motorsport Behringer and the Czech Bonver Dakar Project , also with two cars in the race.

The level of competitiveness in the truck category of the Rallye Oilibya du Maroc 2013 will be great once they are entered nine teams, some of them being the best in the world competing in this class. Despite the strong competition Elisabete Jacinto maintains the ambition to ensure another podium place.
The Rallye Maroc Oilibya 2013 has scheduled to start tomorrow with a first stage of 203 kilometers of selective section. The sands and desert dunes await the arrival of participants since the special will be marked by the crossing of the Erg Cheggaga.

The 2013 edition of the OiLybia Rally of Morocco starts a great event in motorsports The rally raid “family” has grouped...
Copyright 2011-2016 Rallyraid.net - RISE Network. All Right Reserved.
Back to top