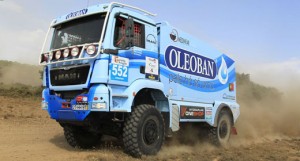 The team OLEOBAN®/MAN Portugal is counting down to the start of the 14th edition of the Rallye Oilibya du Maroc. The Portuguese team formed by Elisabete Jacinto, José Marques and Marco Cochinho prepared in detail one of the toughest cross-country rally competition currently taking place, with the objective of reaching the podium in the truck category .

Familiarized with the extreme hardness of this rally, Elisabete Jacinto recognizes the difficulties that the team will face throughout  this race, however, she believes that they have all the skills brought together to achieve their goals.

With about 200 vehicles confirmed to enter the 2013 edition of the Rallye Oilibya Maroc, it is expected a hard fought competition and some of the most important pilots in the world have already confirmed their presence. This race will also be the host of the final of theFIM Cross-Country Rallies World Championship.

The rally will consist of six stages taking place between Zagora and Erfoud and has a total of 2051 kilometers of which 1517 will be selected sections. The chosen route for this edition promises many passages of sand and the dunes of Erg Chebbi and Cheggaga will impose all its magnificence. The level of difficulty of navigation is one of the dominant features of the rally. This event is held under the patronage of His Majesty King Mohammed VI.

The Rallye du Maroc Oilibya is, nowadays, one of the biggest rallies in the world and this year there will be present more than 24 nationalities. 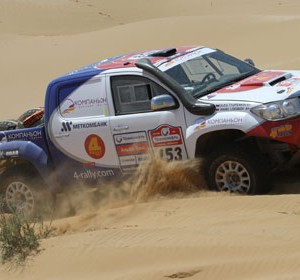 4RALLY team will take start in Rally OiLibya of Morocco 2013 with 2 race cars. Pavel Loginov with Oleg Tyupenkn and Vadim...
Copyright 2011-2016 Rallyraid.net - RISE Network. All Right Reserved.
Back to top