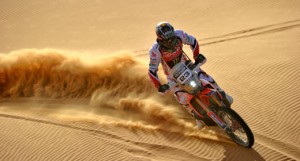 Joan Barreda took the honors in the fifth stage of the OiLibya Morocco Rally, the third so far in this race and the fifth consecutive victory for the Honda CRF450 RALLY which is proving to be of the highest level winning everything since the competition began. The Spanish rider showed himself to be on top form and in doing so returns to the top of the overall leaderboard. His TEAM HRC team-mate, Paulo Gonçalves finished a tricky stage but manages to keep his title hopes alive as we go into tomorrow’s special, the last of the rally.

Spanish rider Joan Barreda’s victory came after the longest stage so far in the rally. Today turned out to be a tough ride for all the team due to a particularly dusty special on route to the dunes. Barreda really put the Honda CRF450 RALLY through its paces to take the best time, some 4 minutes 15 seconds ahead of TEAM HRC team-mate Sam Sunderland. The second place gives the British rider his best result so far in the rally.

Paulo Gonçalves did an impeccable job of keeping his nearest rival in the championship in check. He started out first today, opening the way, and only managed to concede 2’26”. The Portuguese rider is now right behind Barreda in the overall standings. Team-mate Hélder Rodrigues finished in seventh place after starting the special from third position.

Javier Pizzolito was unable to start this morning after the race doctor ruled him out of rally. Yesterday’s fall caused Javier to suffer a perforated muscle in his left leg.

What they said
Joan Barreda:

It was a difficult day. There was a lot of dust and it was really hard to overtake. In the end I got a good result but it was difficult to get past Olivier Pain. After refuelling I set a good pace and continued to push until the end.  It’s really important to win the race for Honda; let’s see if Paulo can win the championship. At the moment we are well on the way. We are in a great position for tomorrow, and we hope it all goes well.

We know that we are at a good level, that the bike is going really well, and we are in with a shout. We’ve got to work hard in the next two months but I’m sure that we can get a good result in the next Dakar.

There was a lot of dust on the track until we got to the refuelling. I think that it went well from then on. I thought that I had some kind of problem, so I had to stop to take a look, so I lost a bit of time, but it has been a good day all round. Very good for Honda. It’s been long and hard, but it’s been good. I’m getting better at the navegating, and I’m improving constantly.

I think that I rode a really good special. I led the way until kilometre 260 when my CAP stopped working. Marc passed me and I figured that I had lost about 20 minutes of the difference from when we set out. There’s one day to go. Let’s see how it plays out.

For the final stage of the OiLibya Rally of Morocco 2013, sand and navigation return once again. After alternating fast tracks and crossing unseen dunes, participants return up the oued with the mythical Erg Chebbi on the left. To finish, they travel west to reach the dunes and cross their final one before reaching the finish arch of the Rally. 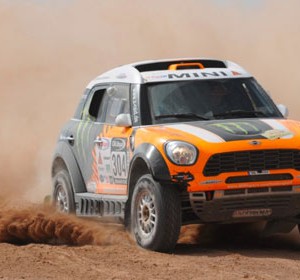 Since Ten Brinke’s rolls yesterday, the minis are untouchable. Only the Argentinean Orlando Terranova didn’t do as well...
Copyright 2011-2016 Rallyraid.net - RISE Network. All Right Reserved.
Back to top