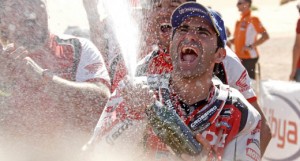 The celebrations begin for TEAM HRC. Things couldn’t have been any better for the new Honda CRF450 RALLY with a victory in the Morocco Rally and a World Championship title picked up by Portuguese rider Paulo Gonçalves sealing his fate in the final stage of the championship. Joan Barreda finished in third place. In doing so, Honda has won five out of the six stages disputed and has three riders in the overall first five standings.

A thrilling final stage saw Paulo Gonçalves win the Morocco Rally. It was a complicated affair with a lot of challenging navigation and many chances to make mistakes. The Portuguese rider was pushing hard and was able to handle the Honda CRF450 RALLY with great skill, and eased through the most high-pressure moments, arriving at the halfway point ahead of his nearest rival Marc Coma. Gonçalves takes the crown of World Championship FIM Cross-Country Rallies. 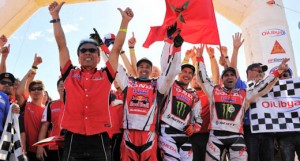 Joan Barreda started the day from first position, but a fall a few kilometres into the race damaged his road-book. In spite of this setback and not knowing the correct route, he was able to continue, following in the tracks of the riders that had overtaken him. He finally came in ninth, finishing in third overall place on the championship podium.

The other Portuguese rider from TEAM HRC, Hélder Rodrigues rode an excellent second place in the final stage of the rally. British rider Sam Sunderland, who set out in second behind Barreda, made a navegational error and finished in thirteenth. In spite of this, Sunderland took an overall fifth final place.

Today has been a fantastic day for me. I’ve won the World Championship title and also the race. I’m really pleased for me and for the Speedbrain team. We’ve done a great job together. Since Brasil we have been able to win the last two races and the title. I wanted to also thank Joan Barreda who has really helped me. Without his help, it would have been really hard to win this title. Thanks to everyone, and now it’s time to celebrate, recuperate and start all over again.

I’m really pleased. I had some navigation problems and it was tough. I started from the front and I had to really push things and take risks. It was the only chance. The main objective was for Paulo to win the world championship and we’ve done it. I’m really happy for him. There was also the possibility of winning the race. It wasn’t easy. I tried my hardest until the end but it didn’t turn out. But I’m really pleased to be up on the podium, with a very quick pace, just two months away from the Dakar. The new bike, the Honda CRF450 RALLY hasn’t given us any problems whatsoever, and we hope that this continues.We will keep on working towards getting a good result in the next Dakar.

It’s been a great week. I’ve learnt a lot with the bike. On the final day I made a few navigational errors like the other riders. But in the end I made it to the finish-line. It’s been a great week apart from that mistake. A good week for finishing well, learning from the bike and I’m looking forward to the next rally.

This has been a really important race for us. Paulo has won the championship and he’s won the race. I think we won almost every day and I think it’s been perfect. It’s a great start for the Dakar and we will go into it with a lot of strength.

We have won this race and I’m really pleased! The race was really fantastic and exciting. Marvelous. It’s been a great success for Honda and for the new Honda CRF450 RALLY. I’m very pleased and very proud of the team. Not only the riders, but also the mechanics, engineers…..everyone. I’m very happy.

It was a very successful race for Honda. We have won five stages out of six, and we’ve won the world title, and the Morocco Rally. We finished first with Paulo Gonçalves and third with Joan Barreda. It was a great team effort -specially from the riders of Team Speedbrain with which we had a great collaboration since the beginning of our new adventure-, and a very good test for the Dakar. Also, with the new CRF450 RALLY we have proved that this machine is on the highest level of the Rally World Championship. I want to also thank all the riders, mechanics and team staff for their work and their huge success.

Next race: The next race for the TEAM HRC will be the Merzouga Rally. Starts next October 21th from Erfoud and finishes October 26th. There are two of our riders entered: Hélder Rodrigues and Sam Sunderland. 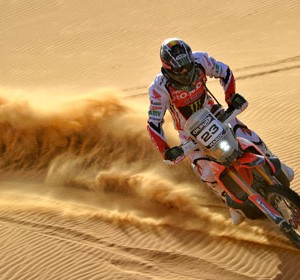 Joan Barreda took the honors in the fifth stage of the OiLibya Morocco Rally, the third so far in this race and the fifth...
Copyright 2011-2016 Rallyraid.net - RISE Network. All Right Reserved.
Back to top