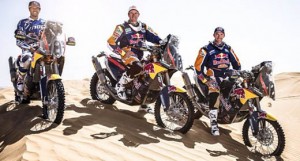 The highly anticipated 2014 model of the KTM 450 Rally bike is set to make its first competitive appearance at the OilLibya Rally of Morocco, KTM’s official Red Bull KTM Factory Team manager Alex Doringer has confirmed. The OilLibya Rally runs from October 13-19, 2013 and is the final round of the 2013 FIM World Cross Countries Rally Championship.

The team, already in Morocco to conduct final tests and settings refinements will first test the bike under race conditions in the opening stage on Monday October 14. Onboard the latest version of the new bike will be multi Dakar Rally winner Marc Coma of Spain, American Kurt Caselli, who made his Dakar debut in 2013 and factory team stalwart Ruben Faria of Portugal.

New machine from the ground up
The KTM 450 Rally bike is the result of dedicated work by KTM’s MSP and R&D and engineering experts who designed and built a completely new version from the ground up. The intention was nothing less than to produce the best possible bike to allow the KTM Factory Team to go for another Dakar victory in January 2014. The motorcycle class of the Dakar Rally has been safe in KTM’s hands for the past 12 editions. The Austrian manufacturer has also registered three successive wins through Coma and Cyril Despres since Dakar Rally organizers reduced the displacement size of the premium class rally bike to 450 cc three years ago.

Final tests prior to Dakar 2014
The Morocco Rally represents the KTM factory team’s final tests ahead of the 2014 Dakar Rally and will also decide the 2013 World Champion. KTM’s Coma is the title holder and starts with a narrow three-point lead over rival Paolo Goncalves of Portugal. Coma won the first three rallies (the Desert Challenge in UAE, the Sealine Rally in Qatar and the Sardinia Rally in Italy). He placed second in the Desafio Ruta 40 in Argentina and was third in the Brazilian leg, the Dos Sertoes.

Joining Coma, Caselli and Faria will be the fourth member of the official factory line-up, Francisco Lopez of Chile, who will ride the 2013 version of the KTM 450 Rally bike. Also on the 2013 version in Morocco will be KTM’s three official supported riders for Dakar 2014: KTM Australia’s Ben Grabham, Broadlink KTM  Riaan van Niekerk of South Africa and  ORLEN KTM Jakub Przygonski of Poland.

The OilLibya Morocco Rally 2013 takes a field of 74 riders over 1517 km of selective sections and 534 km of liaison in six stages of challenging desert and sand dune conditions. Coma, as championship points leader, starts with number one. 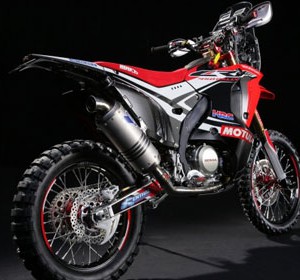