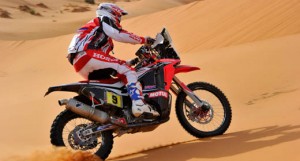 Sam Sunderland was outstanding in the third special of the rally. The British rider’s performance for TEAM HRC earns him top place on the leaderboard of the Merzouga Rally, after finishing second in today’s stage. Tomorrow will be held the first half of the Marathon stage.

The ‘Bereber’ stage is the longest so far in the Merzouga Rally, although it was reduced to less than that which had been previously planned, putting the riders to the test. The two TEAM HRC riders, Hélder Rodrigues and Sam Sunderland, set out in first place this morning, opening the route, after finishing first and second respectively in yesterday’s stage.

Hélder made a slight navigational error early on and saw his team-mate Sam overtake him, thus opening the route for a section of the special in the dunes where the rider is particularly at ease on the Honda CRF450 RALLY. Nevertheless, Sunderland had problems with his road-book which gave his competitors a chance to regain some time. In spite of this setback, Sam was able to push hard and finish in second place, a position which moves him up to the top-spot on the overall leader-board. Hélder, sixth on the day, takes third place in the overall standings.

Sam Sunderland: Yeah, it was a good day. It started off really well. I opened the route through the dunes. I felt really confident and I could see well. Then there was a slight modification in the road-book to recalibrate the ICO and it didn’t link with my GPS and I was a kilometre out and didn’t know which one I should go off on. I went off half a kilometre too soon. Then after some kilometres I realized it was the wrong way. So I came all the way back and caught the guy at the end, then I passed the guys and opened to the finish and it was pretty good.

Helder Rodrigues: It was tough to be ahead. I made a navigational error and Sam overtook me. After, both of us made a mistake and we lost quite a bit of time. It was about 30 minutes until we got back on the right track. We arrived at the refueling and I tried to push as hard as possible until the end. Tomorrow I start from behind and I’ll try and win the stage. It’s not easy. The race is that way….hard, difficult and long. The good thing is that the bike hasn’t given any trouble.

Verhoeven wins the stage while Sunderland leads the overall Classification 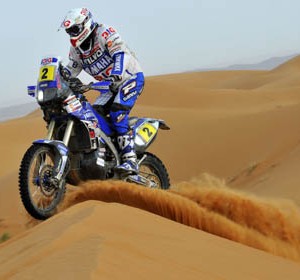 Verhoeven wins the stage while Sunderland leads the overall Classification

After an early start the competitors tackled the third and longest stage of the rally: 327,22 km of dunes and technical tracks...
Copyright 2011-2016 Rallyraid.net - RISE Network. All Right Reserved.
Back to top