Rallye Oilibya du Maroc – Cars: A MINI trio on the podium of this stage 4 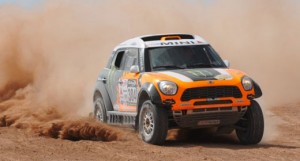 Since Ten Brinke’s rolls yesterday, the minis are untouchable. Only the Argentinean Orlando Terranova didn’t do as well as usual. VASILIYEV / YETVTYEKHOV Mini X -Raid Team No 306 climbs up the rankings at great speed in the OiLibya Rally of Morocco. The Russian has indeed been able to take the advantage over his opponents on the 295 km stage.
Behind it’s a combined attack. This morning Orlando Terranova started two minutes ahead of the surprising Patrick Sireyjol Team Cummins in their buggy. This is exactly the same time that separated the two competitors crossing the finish line. Orlando Terranova is still leading with 24’53 ” on Sireyjol who said: “To maintain my position , the strategy will necessarily be to attack .”

At the top of the rankings, TERRANOVA / FIUZA with 27’53 ahead of SYREYJOL / Beguin Followed by Garafulic / PICARD, VASILIYEV / YETVTYEKHOV and DABROWSKI / CZACHOR .

The OPEN category was won in the fourth stage by SANDRINI / ALONSO on TOYOTA hakken RAID / TGO No. 349. The second is another TOYOTA, No. 377 JASPER / BLAAUW followed by Sabatier / ROJAT on PREDATOR BUGG’AFRIQUE No. 370.  They are always at the top of the category overall.

In T2 it’s a hard fight for the final victory. Today No. 347 MOLGO / GORECKI NAC RALLY TEAM, current second overall takes a few minutes on the leader Failloux/ Besnard GENERATION 4X4 No. 325 who finished third in the stage. The two leaders concede the stage win today in the Russian No. 346 TERENTYEV / BERKUT team

In T3 the POLARIS No. 302 SEAIDAN / LICHTLEUCHTER RACE WORLD TEAM lead the stage and sign their highest ranking in the scratch since the beginning of the OlLibya Rally of Morocco. The team seems to have found their stride to win the T3 category of the Rally.

TRUCKS: Elisabete JACINTO again and again !
Elisabete JACINTO / Marques / Cochinho on MAN No 400 win this stage in 3h48’57. A fourth win for them. Followed closely by SZUSTOWSKI / KAZBERUK / Skrobanek 5 minutes behind with their BONVER TATRA DAKAR PROJECT No. 406. The third is KOOLEN / VAN- DEN- GOOBERGH / VAN- UDEN on GINAF No. 410.
JACINTO / Marques / Cochinho always ahead in the overall.

“Morocco is our beautiful playground; the scenery is gorgeous, we are lucky not to have any real difficulties so far. Yesterday was our best day yet, we really enjoyed it. This is my first Moroccan adventure and I am going to Dakar in 2014, so preparing here is paramount. I started rally raids 10 months ago; it really is a great experience. And it’s varied: you drive, you dig, and you navigate: what fun! I was a competitor before, but what I like here is that you don’t know the tracks, and at the end of the day you say to yourself:”hey, that was a good day!”.

“We are in a good position overall (20th), after 3 Dakar’s, including the last one in Africa in 2007. And two in Argentina, one that I didn’t finish. I did finish first diesel in the Silk Way. So here I am preparing for the 2014 edition. I like my car; my team are reliable and efficient.”

“We are doing pretty well; we are testing for the Dakar, not vying for the podium. This rally is not an easy one, the tracks are tough, but we like it.”

“What a fantastic adventure, this rally is: A combination of powerful cars, excellent drivers and great navigators, all testing themselves to prove what they can achieve.”

“Superb rally with an unexpected score: we are 13th overall so far; we thought we wouldn’t make it passed 25th! We like the specials this year fast and sandy and I believe we have found our rhythm. We would like to say a big hello to our friend Jean Francois, who hasn’t joined us this year for the first time.”

“I am happy to say, that so far things are looking good. There is a very friendly atmosphere at the rally: as we say race by day, party at night. Yesterday’s special had everything you could wish ror : sand, stones and heat ! Perfect training for the Dakar. For the anecdote, I am the only pilot that has ever participated in the Dakar, in all four categories!” 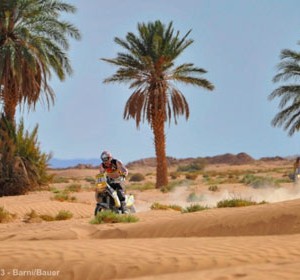 The OiLibya Rally of Morocco Competitors discovered a superb special entitled “On the Trail of the Mummy," and what a program!...
Copyright 2011-2016 Rallyraid.net - RISE Network. All Right Reserved.
Back to top