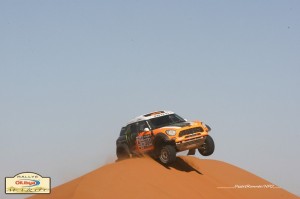 The duo TERRANOVA / FIUZA the Mini X -Raid Team No 304 won the stage, while that of TEN-BRIKE/BAUMEL WEVERS team FORD No. 300 was rolled in the special, the team emerged unscathed. The mishap cost them 30 minutes and they finished 13th in the stage.

” We wanted to put pressure on Ten Brinke throughout the special. About thirty kilometers from the finish, he made a mistake and lost more than 30 minutes. “

The CUMMINS buggy No. 309 SYREYJOL / BEGUIN had a nice rally and finished second in the stage. Closely behind them the three Minis X -Raid Team, VASILIYEV / YETVTYEKHOV No 306 of Garafulic / PICARD No. 318 and VILLAGRA / PEREZ- Compañó No. 308. These three cars were in the last third, fourth and fifth position at the end of stage 2 … but in reverse order!

In the Open category it’s the new Predator No. 370 Team of BUGG’AFRIQUE Sabatier / ROJAT who wins the stage ahead of SANDRINI / ALONSO – SANDRINI No 349. LYCARLETTI/LACHAUME No 374 are third also on Toyota on the team GENERATIONPREDATOR .Failloux / Besnard are the category winners with their T2 in a TOYOTA GENERATION 4×4 No. 325. Followed by BUESNA / CLAIR (GENERATION TOYOTA 4×4 No 348) and Chahinian / RICHAUD TGO / hakken RAID No 338.
The charming 100 per cent female MERRY / MARCHAND No. 337 competed for the podium in the class and was 3rd overall yesterday did a forward roll. They will not take the start tomorrow. 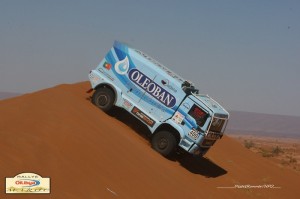 POLARIS Team XTREME PLUS No. 327 SEAIDAN / LICHTLEUCHTER wins the T3 category. SSV POLARIS No 390 of BALTAZAR / ALARCON TEAM OF BARROUDEURS no chance to their pursuers , and seized the stage win and continue to lead the category overall.

TRUCKS: a lady continues to dominate the mamoths

Elisabete JACINTO with Marques / Cochinho beside her on the MAN No 400 sign off a new stage victory today. 7 minutes behind her second place is KOOLEN / VAN- DEN- GOOBERGH / VAN- Uden on GINAF No. 410 . The COQUELLE / BECART / LEFEVRE Team No. 402 took third place in the category. Overall, the Spanish leads 11 minutes ahead. 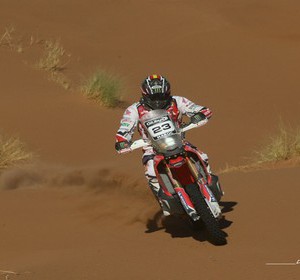 Competitors began this special with a fairly technical mountainous part, then headed for the dunes of the Erg Chegaga, where...
Copyright 2011-2016 Rallyraid.net - RISE Network. All Right Reserved.
Back to top