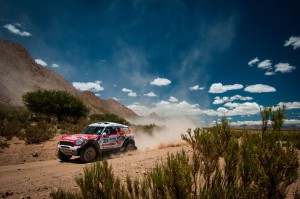 Terranova is regarded as one of the overall-win favourites. The fifth-placed in the 2013 Dakar already contested the Baja Spain as well as Routa 40 and so, it’s the third event in 2013 and the first one as part of the Monster Energy X-raid Team, for him. Meanwhile, Schott demonstrated that he knows how to race the MINI ALL4 on sand by finishing seventh in Abu Dhabi. Now he also wants to really go for it in Morocco.

Yacopini and Villagra raced their debut season as X-raid drivers and gathered their first experiences with their new vehicle in the Baja Spain and the Baja Poland respectively. In Morocco, they are going to race across dunes in anger for the first time.

This Monday, the competitors will start into the six-day rally featuring a total of 1.517 special-stage kilometres. The first three stages will be raced around the city of Zagora. Afterwards, the team will travel to Erfoud, the venue of the stages four to six. Throughout the event, the teams will see virtually only one thing: sand! Only two of the days also will comprise sections with harder track surfaces. In the Morocco Rally, a good navigation is just as important as a fast driver – at least.

X-raid Team Manager Sven Quandt: “The Morocco Rally is a good and the last opportunity to test the MINI ALL4 Racing in dunes and sand prior to the Dakar. Therefore, we mainly focus on those drivers who haven’t raced too many events, over the course of the 2013 season to date.”