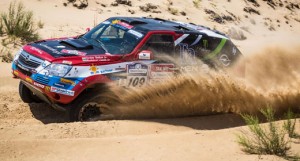 Balázs Szalay and László Bunkoczi started their joint career venture in Africa about one hundred thousand race kilometers ago, and after seven Dakar Rallies (finishing all them) the guys decided to head back to Africa. They registered for the Africa Eco Race, which’s route leads though the legendary Dakar route, through Morocco and Mauritania finishing in Senegal, at the shore of the Pink lake.

“Everything started in Africa, we fell in love with desert racing there” explained Balázs Szalay, who participated 12 times in the longest and hardest cross country rally race of the world. Six years have passed since we were driving on this very same route, and though we had lot of fun in South-America, we always discussed with the race mates that Africa was the real thing and we racers all long for Africa. So we decided to return.”

Though from the point of view of logistics and challenge the Africa Eco Race is much more difficult (here not only the field, but also the service team is going on pathless roads), but Szalay and his co do not care about statistics, which clearly show that the Sahara is less generous with passer-by racers than the South-American Atacama.

“The African countries realized that they need cross country rally races – because it is a considerable income for them – so the race is completely safe, the local governments and army is the guarantee. The challenge, the courses, the barren landscape definitely ensure a difficult race, but our chances are very good to finish at the very front. Of course there is no guarantee, but we will fight hard till the end I can promise that. Among many other things the Sahara is very attractive, because it seems unconquerable” said Balázs Szalay who will not be followed by the race truck, he will only rely on the service team which will consist of Zsolt Darázsi, Péter Őri and István Kecskés on the 2014 race.

“It has been ten years since I first stepped on African terrain and the first such kind of experience is at least as memorable in one’s life as the first kiss” told us László Bunkóczi, the co-pilot of the Opel Dakar Team. “I have nice memories of those days and in the past years from time to time we were thinking about that we should return to the roots, where the real challenges have started. One of my favorite movies is the Le Boulet, and in the movie one of the main characters steals Jean-Louis Schlesser’s car and shouts: On the road again! That’s what I feel now. We are not yet on the road, but we are preparing, training and waiting for it. Now, that our start is sure, we would like to accelerate time to be there again.”

Determinative part of car races is the technical background. About the car, the duo will start with the Opel Mokka on the demanding distance of the Africa Eco Race, which have already proven on the 2013 Dakar and the Silkway Rally and certainly got some new developments, as usual. 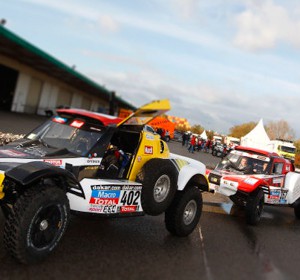 The adventure sometimes even begins long before the race! The meeting point of Le Havre for loading of the European vehicles...
Copyright 2011-2016 Rallyraid.net - RISE Network. All Right Reserved.
Back to top