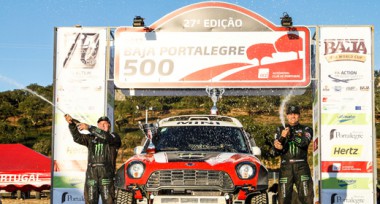 With a fantastic recovery, Poland’s Krzysztof Holowczyc and his MINI ALL4 Racing secured FIA Cross Country Rally World Cup drivers’ title in the Baja Portalegre held in Portugal. For X-raid it’s the sixth consecutive World Cup triumph! Holowczyc travelled to Portugal as third in the championship but together with his co-driver Andreas Schulz he won the event to leap to the top position in the World Cup standings and secure the title. In addition, the Monster Energy X-raid Team won the FIA World Cup team title. Thanks to the points scored by Holowczyc and Nani Roma, this title was secured by the team even prior to the season final.

Nonetheless, the Polish-German pairing had to work hard for achieving this success! An extremely big number of deep water crossings made for difficult conditions but the Pole and his MINI ALL4 Racing completed the special stages in safe style without taking any risks. With his young compatriot Kaczmarski also convincing with a great performance and securing second place. For the Pole, it was only the second event he contested at the wheel of the MINI ALL4 Racing.

Since 2008, the FIA World Cup title has been won by the Trebur based team. In that year, Qatar’s Nasser Al-Attiyah won both the FIA Cross County Rally World Cup and the FIA Cross County Baja World Cup with the BMW X3 CC. In the following years, the title was won by Frenchman Guerlain Chicherit and Russia’s Leonid Novitskiy who prevailed in two consecutive years. The 2012 World Cup was won by Khalifa Al-Mutaiwei in the MINI ALL4 Racing. The driver from Dubai already won the 2004 World Cup title for X-raid – in that year with the BMW X5.

“Yes, we’ve made it,” beamed Krzysztof ‘Holek’ Holowczyc. “We opted for a fast but clever approach, here in Portugal. Nothing would have been worse than making a mistake in the closing stages. But in the end, Andi and I won the Baja – and the title, too.”

“From the very beginning we were optimistic that Krzysztof has got the chance to win the title,” said Monster Energy X-raid Team Manager Sven Quandt. “Certainly his season wasn’t trouble-free but he kept it cool at Portugal and consequently clinched the title. The conditions with the loads of water were anything but easy. Now we have been undefeated in the World Cup for six years.” 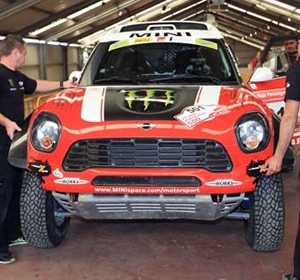 The most charismatic National Off-Road competition is back in Portalegre. On its 27th edition, the ACP Motorsport event will...
Copyright 2011-2016 Rallyraid.net - RISE Network. All Right Reserved.
Back to top