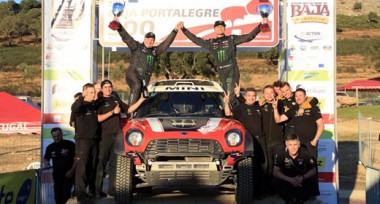 Krysztof Holowczyc won the 2013 Baja Portalegre 500. The Polish driver was the strongest throughout the two days of the most important Off-Road race in Portugal and not only repeated his 2010 win, but he also won the FIA Cross Country Rally World Cup.

On a historic day for Poland’s Off-Road, his fellow countryman Martin Kaczmarski, also at the wheel of a Mini ALL4 Racing prepared by X-Raid, was second. With the Portuguese Filipe Palmeiro as his co-driver, the Polish finished just 1m20s from the top.

Also with reasons to celebrate, Pedro Grancha rounded up the Top 3, some 19m34s from the first. The 2005 National Champion was the top Portuguese driver, with his best result ever in Portalegre.

“I have another trophyto add to my records. This title is very important as well as the win, the second in Portalegre,” said Holowczyc for whom a Top 5 result was enough to ensure the World crown. “I never drove with the fifth place in mind,” he ensured. “The competition level here, in Portugal, is very high and it’s not usual to have so many spectators. It was great!”

Pedro Grancha was also very happy: “That was as good as it gets!. This is my best result ever in Portalegre. I took no chances during the race, I wanted to get to the finish without problems,” admitted the best Portuguese driver on the 27th Baja Portalegre 500.

Just outside the rostrum was another Polish. Marek Dabrowski was fourth, with the Russian Boris Gadasin rounding up the Top 5.

The first protagonist of the event, however, was Miguel Barbosa, winner of the Super Special. The National Champion led  the way during the morning, but found himself in problems after crossing a small river at kilometer 12, with some water getting inside the engine of the Mitsubishi Racing Lancer, leading to a withdraw at kilometer 27. From there on end, Holowczyc took the lead, never losing the first spot until de the end.

Despite the sunny weather, there were several drivers facing problems, amongst them Nuno Santos, with transmission problems on his Opel Mokka Proto. The Brazilian Reinaldo Varela was another one, with problems on the alternator. These incidents opened the door for the Italian Elvis Borsoi to win the T2 and finish in sixth overall. But in the end, the T2 crow went to the Russian Alexander Baranenko, third on class results table. 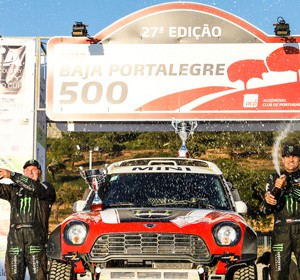