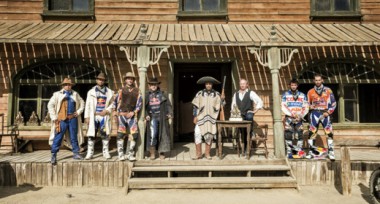 The desert dunes of the Dakar Rally are the destination for a posse of Red Bull athletes and their mighty machinery. The January 5 start date for Motorsport’s ultimate test of endurance is speeding over the horizon and the Desert Wings are ready to meet the challenge head on.

There’s a sense of intrigue surrounding five-time Dakar champion Cyril Despres’ return to the race. After enjoying great success with KTM, the Frenchman has now switched his allegiance to Yamaha. Can Cyril get in tune with his new bike and make it three consecutive victories at the Dakar?

Spectators were denied the chance of watching Cyril race against his great rival Marc Coma at the previous Dakar. Now free from injury, Marc is ready to get back into the race to help KTM maintain their dominance in the desert. Marc is joined in the Red Bull KTM Factory Team by last year’s runner-up Ruben Faria. Also onboard KTM machinery at the Dakar will be Chaleco Lopez and Kuba Przygonski.

Looking to challenge both Yamaha and KTM at the 2014 Dakar will be Team HRC. The most recognisable rider within Honda’s factory team is Helder Rodrigues, the Portuguese biker has already recorded two podium finishes at the Dakar. Joining Helder in Team HRC is Great Britain’s Sam Sunderland, a young rider with a bright future.

Carlos Sainz and co-driver Timo Gottschalk come back to the Dakar with their all-new Red Bull SMG Rally Team. The pair of former champions have teamed up with Buggy designer Philippe Gache, as well as Ronan Chabot and his co-driver Gilles Pillot who will operate the team’s second vehicle.

Giniel De Villiers, winner of the car race in 2009, also returns with co-driver Dirk Von Zitzewitz. This duo have landed their Toyota Hilux on the podium in the last two editions of the desert classic and have their sights set on victory in 2014.

Elsewhere there is plenty of Polish interest with former Olympic ski jumper Adam Malysz back in his Toyota accompanied by Rafal Marton while Jacak Czachor and Marek Dabrowski have ditched their bikes to compete in the car race.

Behind the wheel for Team Kamaz Master will be the young generation of Russian drivers that dominated the truck race at the 2013 Dakar Rally. Overall winner Eduard Nikolaev was followed home by team-mates Ayrat Mardeev and Andrey Karginov to complete a dominant 1-2-3 result for Kamaz. The trio are now out to prove that this remarkable result was no accident.

Marcos Patronelli, reigning champion of the Dakar’s quad race, joins Red Bull’s Desert Wings team for the first time in 2014. The two-time Dakar winner is rallying royalty in his native Argentina and his fans will be lining the entire route to cheer him home once again.

We invite you to share the journey of our Desert Wings at the 2014 Dakar Rally as the route crosses Argentina, Bolivia and Chile. Be there every step of the way with unprecedented access to our athletes and comprehensive coverage on redbull.com/motorsports.

A tragic absence from this Dakar will be two-time stage winner Kurt Caselli. The talented American biker suffered a fatal accident while racing at the Baja 1000 in Mexico last weekend. Our thoughts are with Kurt’s family and his many friends. He will be deeply missed by the entire Red Bull family, his teammates, his fellow competitors and by his fans all over the world. 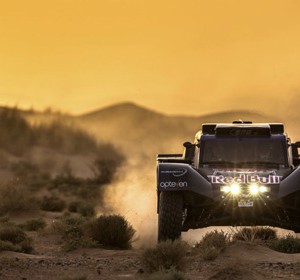 Rally racing legend Carlos Sainz is heading back to the Dakar as he continues to feed his addiction to Motorsport’s toughest...
Copyright 2011-2016 Rallyraid.net - RISE Network. All Right Reserved.
Back to top