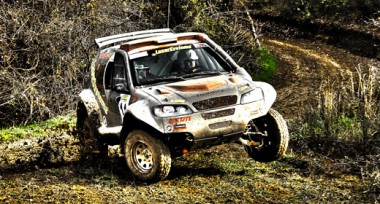 In the morning thick fog covered the landscape, but luckily the sun began to shine soon that brought everyone into better mood. This described the day afterwards, in spite of the later problems. The first half of the rally proved to be more successful than expected but unfortunately due to a leakage at the engine two cylinders of the HAWKIA didn’t work.

“In my opinion these were the best, most pleasant tracks of this year’s races. I loved the many changes of direction, both horizontally and vertically. The mud was much smaller than we thought so the only one or two crews participated in the forecasted wood-cutting. I felt the possibilities in the route abundant from start to finish. The fact that for us it didn’t work out doesn’t decrease the value of the rally. It was annoying that the ignition got water exactly at the rally that was most important for us, but this happens. On the last two specials two cylinders didn’t work properly and due to this we lost engine power. When Kaposi parked in the forest, across the track, it was all the same for us, our rivals overtook us. Still we have no reason to regret anything because we achieved the result we expected and so we have a good position in the championship. I want to say thanks to our sponsors, to our mechanics, to my co-driver Matyi, and to all who helped us for their support enthusiasm and perseverance!”

“This time others had luck and we didn’t, but I think we don’t need to feel ashamed, in December we can go for a joyride to Santa Claus Rally proudly. We ended a very good year!”

The next event for the team – and also the last for 2013 – will be the Santa Claus Rally on 7-8 December in Veszprém. Sólyom Team welcomes the spectators and fans at the service park of the rally and at the specials. 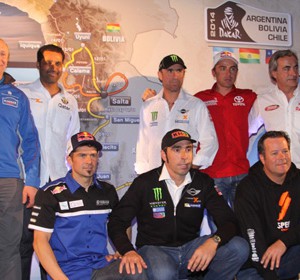 The organisers of the Dakar have taken advantage of the announcement of the route of the 36th Dakar to reveal a list of competitors...
Copyright 2011-2016 Rallyraid.net - RISE Network. All Right Reserved.
Back to top