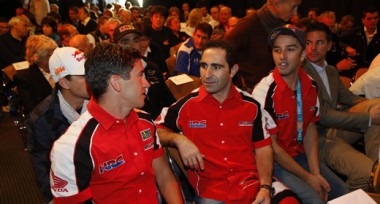 It was Paris, the city which most often has been the official race start of the Rally Dakar –the world’s toughest race- that played host to the 2014 race presentation, alongside its most emblematic sights, the Champs Elysees and the Arc de Triomphe.

Étienne Lavigne, race director and David Castera, sporting director, were there to disclose some of the until now unknown details of the race that sets out from Rosario, Argentina, on the 5th January 2014. Awaiting us are over 8,700 kilometres of which 5,228 are against the clock. The rest day is due to take place in Salta, Argentina, before the race enters the unchartered territory of Bolivia, before coming to a close in the Chilean city of Valparaíso.

Joan Barreda, Hélder Rodrigues and Paulo Gonçalves were there to represent the official TEAM HRC, and the bike on which Paulo Gonçalves took the World Championship prize in the most recent edition of the Moroccan rally. It was the bike that again stole the limelight.

Meanwhile some 6,864 kilometres away in the Japanese capital’s Tokio Motor Show, the Honda CRF450 RALLY was also the centre of spectator’s attention together with the MotoGP world champion bike, as well as other new Honda goodies for 2014.

Tomorrow the French port of Le Havre sees the embarking of all European vehicles due to participate in the Rally Dakar. They will get to the South American continent in just over a month.

It’s going to be a really exciting Dakar, especially as we’ll be entering Bolivia for the first time. It’s a longer distance and it’ll be a much harder Dakar, with more lengthy stages. For the moment we don’t have any more information than that.

It’s been great to come here for the first time to the Dakar presentation; a day on which we get to catch up with the other riders and meet the politicians from different countries. It will be really nice, with the trip to Bolivia, where we go up to altitude. I love this race.

What they told us was just as we were expecting; more difficult, more challenges and a new country where we get to cross the Salar, which is totally new for everybody. It’ll be really tough and we need to be well-prepared as the Dakar is never easy. We hope to finish the test and achieve our goals. 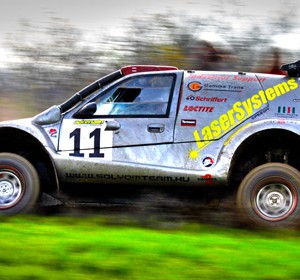