Rally racing legend Carlos Sainz and his all-new team are using every available moment to prepare for the upcoming Dakar Rally.

Former Dakar champion Carlos Sainz has been back behind the wheel of his Red Bull SMG Buggy as the team search for optimum performance at the 2014 Dakar Rally. The shakedown exercise in France was the last chance for Carlos to fine-tune the two-wheel drive Buggy before it’s transported to Argentina. Extensive testing throughout the year in desert locations such as Morocco have allowed the Red Bull SMG Rally Team to develop their vehicle ahead of the 13-stage rally. During this process the Buggy has been constantly evolving towards its final race specification. 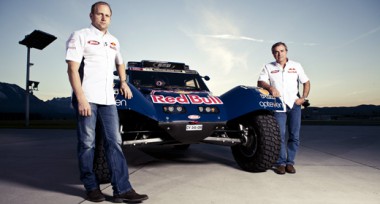 It was with great satisfaction that Carlos and co-driver Timo Gottschalk were able to test the very latest adjustments during the shakedown and find their machine in perfect working order. These extra weeks of testing have only been possible because Buggy #303 is being flown to South America rather than joining the majority of race cars on a three-week shipping voyage from Europe.

Philippe Gache, Red Bull SMG Rally Team Manager, is certain that the airborne route to the race has given them a significant edge in their preparation for the Dakar. Also heavily involved in the development of the Buggy throughout the year has been Ronan Chabot and co-driver Gilles Pillot. This duo takes control of Carlos Sainz’s twin car, Buggy #312, twelve months after their seventh place Dakar finish in the previous generation SMG model. With such experience and expertise within this highly skilled professional operation the team are confident their new Buggy, the 23rd generation to be built by SMG, can master the world’s toughest test of endurance.

Both race cars have now been loaded up for their trip to South America but the members of the Red Bull SMG Rally Team will not be enjoying a typical festive season. For example, Carlos Sainz is committed to a physical conditioning programme that sees his level of fitness on a par with his WRC title winning days. This strict regime ensures that the champagne is on ice until the finish line of the 2014 Dakar Rally in Valparaiso on January 18.

“It felt great to get back in the Buggy and finding everything working perfectly filled me with confidence. We have to remember that this car that Philippe has built is completely new so to have it responding exactly as we want makes me very happy.”

“Timo and myself have been made to feel very welcome by the members of this team that have already shared a few adventures at the Dakar together. Ronan and his co-driver Gilles were also in a Buggy at the previous Dakar so there’s been a great exchange of ideas on what works best.”

“It’s also been great to have Philippe as Team Manager because he has actually driven the Dakar and has fantastic technical knowledge. From a driver’s point of view this makes it easy to bounce around ideas for possible adjustments that can help us during the race.”

“The organisers have revealed the distance of each stage but they are still keeping lots of important details about the route very secret. I sometimes check the internet to see if there’s a fresh clue to work with and I’m in contact with Carlos to share any new discoveries about the race.”

“Things have been very busy this year. Putting together a completely new race car involves lots of travelling and lots of hard work. It was a great feeling to sit in the car at the shakedown and have everything ready to go.”

“Now Christmas is coming and I’m at home taking time to relax with friends and family. I’m not sure anybody in our team will be able to completely disconnect from the Dakar during this time because we’re all so excited to start racing.”

“We have had more time to work on the car because we’ve been able to put Carlos’ Buggy onto a plane from Paris to Buenos Aires. Very few cars get to fly to the race. It has benefited us because it gave us another four or five weeks with the car and that time is crucial.”

“We knew that there would be plenty of tough racing ahead of us in South America and it seems the organisers have not disappointed. We have three timed special stages over 600km and lots more in excess of 400km. The distance at this Dakar is greater than ever before but we’re happy with that because it’s something we have worked hard to prepare for.” 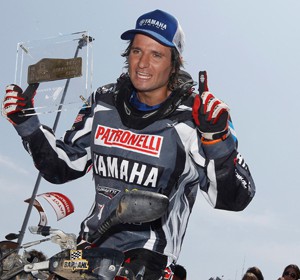 Among the 40 quads to start the rally, more than 60% of which are South American riders, there will be many challengers for the podium....
Copyright 2011-2016 Rallyraid.net - RISE Network. All Right Reserved.
Back to top