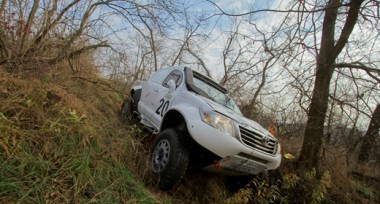 The last round of the Hungarian Championship couldn’t have been better for the crew Imre Fodor – Attila Csató. They finished the 2013 season with a 2 nd place overall – and the championship title!

Closing round of the Hungarian Cross-country Rally Championship, organised in Domony on 16 November, proved to be a true success for Imre Fodor, Attila Csató and their Overdrive Toyota: they finished 2nd and with this result they grabbed the championship title.

When after being absent from cross-country rallies for more than four years Imre Fodor returned to the tracks this spring, he planned to devote the 2013 season to finding his rhythm again and learning his new car, an Overdrive Toyota Hilux. But soon he scored his first victory and by the halfpoint of the championship he was already on the top of the board. The second half of the year was about the battle with the crew Imre Varga – Ferenc Szegedi and before the last round the gap between the two crews was one tiny point. It was obvious that the championship title would go to the driver who finishes in front in Domony.

So at the season closer the only working tactic could be to protect the car and bring it to the finish in one piece, of course, at the fastest possible pace. Finally with constant racing the crew finished second and that was enough to be able to celebrate at the end of the season.

“It was so hard to drive like this but we had to keep in mind our main priority and this was the 100% safe speed. Again our tactic was to push at the beginning and after that we only had to race with Imi Varga and his enormous routine. We are very happy, my return is a success and the car worked flawlessly throughout the year. During the season we made some mistakes and due to this, the battle at the end was really fierce – but the most important is that we are the champions”, Fodor says.

“There was a lot at stake but we knew the difference between the two cars and this gave us some confidence. Our tactic was to see what we can achieve on the first two specials with a normal pace and then we adjust our speed to that. The point was to get some time on Imi Varga on each special. As the end of the rally approached it was harder and harder to hold Imi back. He wanted to fight with Fekete but he knew that our goal was more important.

As for the season, for both of us this was about return, it’s been a long while since I did a full championship. It was obvious already at the first round that our pace is competitive. At the second and third round we finished second and in Pusztavacs sprint round we managed to achieve our first victory.

The HunGarian Baja didn’t go like we wanted and expected but strangely I still remember it positively, namely that after the less successful superspecial we were able regained our feet, repaired the car and finally we fought a good battle with Pál Lónyai. I have the same feelings about Etyek, there we made the end of the championship hard for ourselves, but again we managed to come back and after that we won all specials. As far as we know, this is the first national title for the Overdrive Toyota. Even the owner of the team, Jean-Marc Fortin sent us his congratulations”, co-driver Attila Csató says.

And what about the next plans of the team? Well, according to the driver the champion car has been sold already but, of course, they want to continue racing. In a well-known workshop their new racing car is beeing built already.. 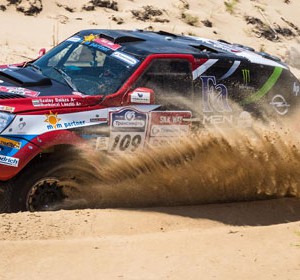