The Red Bull Desert Wings team at the upcoming Dakar Rally is packed with icons of the race that have already claimed the ultimate prize in their chosen disciplines. There’s Carlos Sainz andGiniel de Villiers in the car race, Cyril Despres and Marc Coma on bikes as well as champion trucker Eduard Nikolaev.

Now Marcos Patronelli joins these illustrious names to fly the flag for Red Bull Desert Wings at the upcoming Dakar Rally. The two-time winner (and 14-time stage winner) of the Dakar quad race and crowd favourite of his native Argentina will be chasing down his third title on the road from Rosario to Valparaíso.

Marcos’ Dakar adventure began by racing alongside his brother Alejandro. The Patronelli brothers were quick to take full advantage of their local knowledge and dominate the Dakar on South American soil. In total, the Patronelli brothers have won the last four editions of the Dakar quad race between them, Alejandro in 2011 and 2012, Marcos in 2010 and 2013.

The Patronelli brothers helped ignite a passion for quad racing across the continent that now hosts the Dakar Rally. Among the 40 quads to start this latest Dakar, more than 60% belong to South American riders and Marcos Patronelli is still the man to beat.

With Alejandro now retired from racing the Dakar it was time for Marcos to refresh his support structure ahead of another assault on the 13-stage desert classic. As with Marcos’ five previous entries to the Dakar he will be assisted by Yamaha Racing Argentina but this time there’s a twist in tale.

Following five-time Dakar winner Cyril Despres making the move to Yamaha Factory Racing it now means that both the reigning bike and quad champions will be working in the same section of the bivouac. Side-by-side cooperation from Marcos and Cyril will prove vital with longer distances and more marathon stages at this Dakar compared to previous editions in South America.

“I’m delighted to take my place in the Red Bull Desert Wings team because it means I’m racing alongside a group of competitors that are the best in their category. It’s also a real honour to be competing for Yamaha alongside a rider like Cyril Despres this time.”

“My brother Alejandro won’t be racing because both of us can’t be away from the family business at the same time. Despite Alejandro’s absence I’m part of a big team this year and it’s good to know I have such great support behind me. We are all focused on the race because once again we have a very difficult and demanding Dakar ahead of us.”

“It seems to me that the most difficult portion of this upcoming Dakar will be the marathon stage in Bolivia. The only thing I know is that it’s a hard surface stage at an altitude of between 3500 and 3700 metres. It won’t be a problem for the riders but the quads will lose power. However, like every challenge at the Dakar it will be the same for everyone.”

“The challenge for the team and myself is to defend the title that we have won during the previous four editions of the Dakar. Am I going to win? Well, I always give the same answer: I will do my best and be sure to run my own race.” 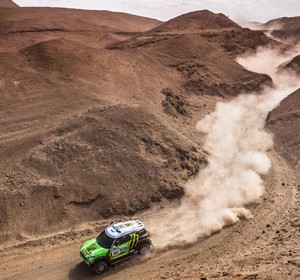