Adding even more excitement and bringing an extreme element to the Chevrolet Detroit Belle Isle Grand Prix, it was confirmed today that the SPEED Energy Stadium SUPER Trucks (SST) Series will compete at next summer’s event, May 30-June 1, 2014.

In only its second season and coming off a wildly-popular debut in 2013, the SST Series will compete on the 2.3-mile Raceway at Belle Isle Park street circuit with two races run during Grand Prix weekend. The high-flying trucks will launch from a standing start for each race and they jump ramps that will be set up on the Grand Prix race circuit.

With trucks expected to reach speeds in excess of 120 mph, launching more than 15 feet in the air and covering distances more than 75 feet on Belle Isle, the SST Series is unique in the sense that all trucks are identically prepared and delivered to drivers in race-ready condition. Drivers do not have an advantage over others because they have a bigger budget or greater technology. Drivers are assigned SST crew members who make minor adjustments at a driver’s request. The rules are specific as to what changes are permitted on the trucks so that the technology in the trucks remains equal.

“All the fans at the Grand Prix are going to love watching the SST Series trucks in action,” said Bud Denker, Chairman of the Chevrolet Detroit Belle Isle Grand Prix. ”These trucks can just fly and it will be incredible to watch them battle wheel-to-wheel on the streets of Belle Isle.”

“With the addition of the SST Series to an already action-packed racing lineup, next summer’s Grand Prix is going to provide the most exciting on-track competition that we’ve ever had on the island,” added Denker.

Founded by former IndyCar and NASCAR driver Robby Gordon, the 1995 Detroit Belle Isle Grand Prix polesitter and race winner, the SST Series raced at the Long Beach and Toronto street circuits with the IndyCar Series this past season. In 2014, the series will feature 15 rounds of competition among 10 race venues, including the ESPN X Games in Austin, Tex.

“It’s an awesome opportunity to bring the SST Trucks to Detroit and race next season at the Chevrolet Detroit Belle Isle Grand Prix,” said Gordon, who is also a driver in the series. “We believe SST is the most extreme and exciting form of motorsports on four wheels in the world and we’re thrilled to be able to bring it to the fans in the Motor City.” 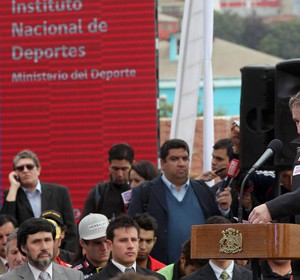 In Bolivia, Chile and Argentina the South Americans have already shown their enthusiasm with the start of the Dakar just...
Copyright 2011-2016 Rallyraid.net - RISE Network. All Right Reserved.
Back to top