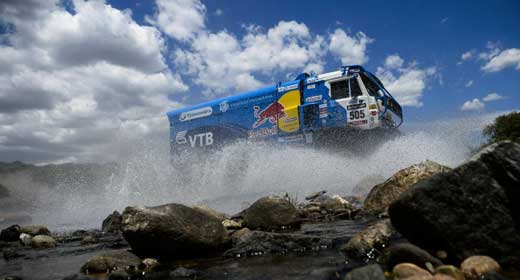 The final podium of the previous edition of the Dakar resembled an ocean of blue as Team Kamaz Master claimed a 1-2-3 finish in the truck race. Now the Russian team return to the desert to prove that this remarkable result was no fluke.

The pedigree of Kamaz at the Dakar is indisputable with the team achieving 10 wins since the turn of the new millennium. However, what stood out about their most recent win is that it came after the retirement of the greatest trucker to ever grace the Dakar.

Vladimir Chagin’s record-breaking rally-raid career saw him win the Dakar on no less than seven occasions. ‘The Tsar of the Desert’ stills holds the record for victories in a single category at the Dakar. Vladimir retired from racing the Dakar after his win in 2011 and so did his lieutenant Firdaus Kabirov, a two-time winner of the desert classic.

When Vladimir and Firdaus stepped out of the cab they left the door of opportunity open for the next generation of Kamaz drivers. Leader of the new pack is Eduard Nikolaev who continued the winning tradition of the team with victory last time out.

Eduard was joined on the final podium in Santiago de Chile by his team-mates Ayrat Mardeev and Andrey Karginov. First to congratulate the victorious trio was Vladimir Chagin, now performing the role of Kamaz’s Team Leader.

Two more Kamaz drivers will join Eduard, Ayrat and Andrey at the 2014 Dakar Rally as Anton Shibalov and Dmitry Sotnikov take the wheel to complete a five-truck line-up .

In addition to some fresh faces inside the cab there has also been significant alterations under the hood of the Kamaz 4326 for the upcoming Dakar. Improved brakes have been installed to help bring the 16 tonne blue beast to a halt. Kamaz also have in mind new emission regulations that will be imposed in 2016 so arrive with not only their trusty Yaroslav engine but also a new motor developed with Liebherr.

With such meticulous planning and chess-like tactics out on the stage it remains clear that Team Kamaz Master are still the guys to beat at the Dakar.

“We want to prove that the results last time out did not come by accident and that our new generation of drivers can be even more successful than the last. I have great respect for our competitors and I’m fully aware that they will have been working as hard as we have in preparation for the 2014 Dakar. We’re expecting a very interesting race and we will do our best to delight our fans once again.”

“Our team is totally focused on the Dakar. This race is not just two weeks in January for us, the work carries on the whole year. We all have massive respect for those who established the Kamaz brand and the tradition of winning the Dakar. The philosophy of the team is passed down from one generation to another. Now the young crews feel responsible for achieving the success that our heritage demands.”

“It has been proven for a long time that the most important thing at the Dakar is endurance. It’s essential to keep up the pace until the finish. We have seen some of our rivals gather speed right at the start but then make mistakes that cost them. I try to be as calm as possible. Whatever happens during the race we must remember to keep our eyes on the road.”

“I felt emptiness after the finish of the Dakar 2013. All year we prepare to the Dakar, we count the days and then it’s suddenly all over. After a dramatic final stage last time when we lost a wheel but still held third place it felt so good to get over the line. People congratulated us and only in that moment do you began to understand that all the dramatic twists and turns of the race have entered into history.”

Semen Yakubov: "The 2014 SILK WAY is much more challenging" 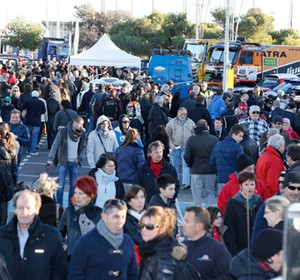 Today, december 29th 2013, the SONANGOL AFRICA ECO RACE has started for the third consecutuive year in the Seaside resort...
Copyright 2011-2016 Rallyraid.net - RISE Network. All Right Reserved.
Back to top