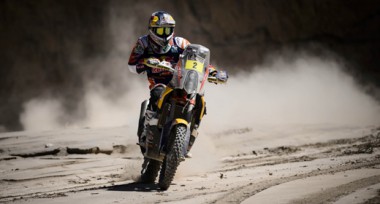 Red Bull KTM’s Marc Coma of Spain finished second in Stage Seven of the Dakar rally on Sunday to continue to lead in the overall standings by a substantial 38 minutes 14 seconds from Joan Barreda of Spain. Red Bull KTM’s Jordi Viladoms moved up to third overall as the Rally moves into its second week.

With the rest day behind them riders set off in the early morning on the first part of the second scheduled marathon stage, also breaking new territory for the Dakar Rally by entering Bolivia. The start was initially delayed because the rescue helicopters were unable to get airborne because of low-lying clouds.

Respectful of the fact that the marathon stage requires riders to take good care of their machinery and tires, Coma rode a cautious stage and clipped only four minutes off his overall lead.

It was also a good day out for KTM supported rider Kuba Przygonski of Poland who finished fifth in the stage just 8 minutes 56 behind Barreda. He is now seventh overall. KTM’s South African supported rider Riaan van Niekerk was eleventh in the stage and advanced one place in the overalls to thirteenth place.

Their route took them to the famed salt flats of Salar but before they reached it they had to negotiate a difficult mountain trail where a clear head and perfect navigation was key to getting through. The timed special was in two parts, the first of just over 100 km followed by a small neutralized stretch and second timed sector of 161 km, which was quite fast.

Added to the challenges of Stage Seven, competitors rode at an average of 3500 m altitude and wound up their day crossing the 20 km of great, white expansive salt flat, said to be the biggest in the world, that because of rain was very muddy.

KTM Factory Team Manager Alex Doringer said he continued to be very happy
with his team. “This was the first part of the second marathon stage and Marc rode a very good race today to maintain his lead.  I’m also super happy with Jordi (Viladoms). He’s done brilliantly to be in third overall at this stage, and as I said last week, both Kuba and Riaan are getting better and better. Both of them are happy and focused.”

Doringer underlined that the next step was to get through the second half of the marathon stage. “Then we will be in Chile. There’s still a lot of kilometers to go and we’ll be taking things one day at a time.”

Stage Eight takes competitors from the Salar de Uyuni to Calama over
230 km liaison and 462 km of timed special that makes up the second half of this marathon stage. It takes riders around the 400 km salt flat and in the shadow of the Tunupa Volcano at a towering 5300 m altitude. 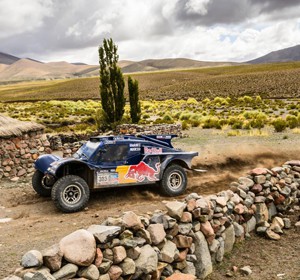 Spain's Joan Barreda took his third victory in the 2014 edition, beating overall leader Marc Coma by 4′03″ at the end of a historic...
Copyright 2011-2016 Rallyraid.net - RISE Network. All Right Reserved.
Back to top