The 4th stage of the SONANGOL AFRICA ECO RACE went as planned, the quality of the course satisfied the participants both on two and four wheels and the weather was close to summer temperatures, over 20°C with a beautiful sun. 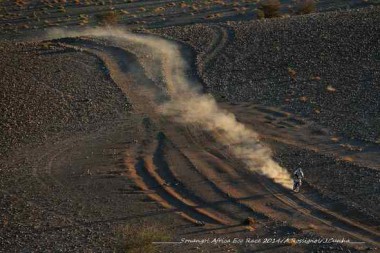 The arrival of the selective sector set up in Oued Aarraid on a nice sandy track was spectacular as three bikers arrived and passed the line at the same time. A little bit like a 20 minute motocross race but, they raced for over 6 hours and during 390km. Nobert DUBOIS was the first to pass the line on his 690 KTM and it made him today’s stage winner. A nice revenge for the Frenchman: “ It was a very nice stage for me where I got to appreciate the performance of my ride. I also managed my navigation which was not easy and in this case it’s difficult to be quick without doing errors. It was a good day. The old guys are still here! We are not going to let the youngsters take the large this easily.”

Obviously, these words where ironically destinated to Corsican Michael PISANO, 2nd of today’s stage 6’13” minutes behind. The Corsican and his 450 honda keeps the first position in the general rankings 9’25” in front of Dominique ROBIN, also on KTM, 3rd of the day at 8’24”.

A sad news came and shocked the rankings as Martin FONTYN abandoned the race and preferred to do medical checks after a big crash on yesterday’s stage. That makes the Belgian Joris VAN DYCK, very regular since the start, 3rd in the general ranking 24’31” from PISANO and DUBOIS is 4th at 29’43”.

The good news of the day came from Harite GABARI which managed to continue the race. On his 450 YAMAHA, the Moroccan finished 6th of the day. He explained on the Moroccan TV why he took the decision to continue the race: “ When I arrived at the Bivouac last night, It was impossible for me to continue the race. I didn’t check my bike nor did my road book, but during the night I woke up and figured out the pain wasn’t as bad so I decided to take the start today. I don’t regret it as tomorrow is not a long stage and after that we have the resting. A good opportunity for me to rest and recover before Mauritania. Even if I lost a lot of time, the race is still long and a lot of things can still happen !” 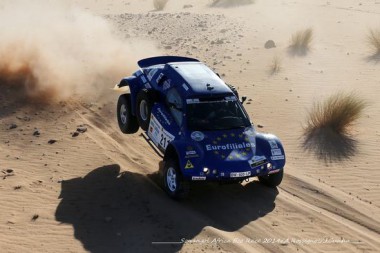 During the last three days, the victory was going through TURON BARRERE’s hands. His tires were way more damaged than his opponents at the end of the stage, easy to imagine how fast he went to earn his first stage win on the SONANGOL AFRICA ECO RACE. Especially the Frenchman broke a rim and damaged the braking system of his CRD Buggy. Knowing the conditions, this is a great performance and places him 4th in general at 43’09”, behind the BUGGA ONE Buggy of SABATIER at 34’14, and the TOYOTA Hilux of LOOMANS at 27’10 from Jean Louis SCHLESSER, only 5th of the day due to a puncture. The other blue Buggy’s victory slowly shows the opponents of SCHLESSER are getting more and more fast and the Frenchman’s margin is getting smaller.

Another participant which had puncture issues is SZALAY which had to change twice, same as the Belgian Stephane HENRARD which stays on top of the open category as Guillaume JORDA and Xavier LORMAND stayed on track before CP 1, with a broken gearbox. Due to this problem, it is now Frédéric PITOUT which is 2nd and Mathieu SERRADORI 3rd.

One last word concerning the crew of the n°207 Buggy composed by Hervé COTEL and Gilles FLORIN, which got back 50 minutes after having lost a lot of time waiting for medical assistance close to Thierry and Sophie BUNEL due to their accident. They are now 7th in the general ranks. 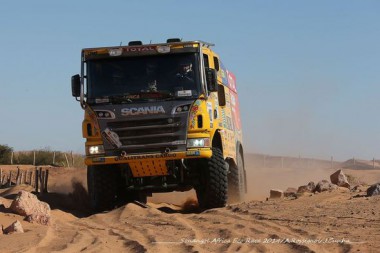 In the truck category, a lot of punctures occurred, which gave the opportunity to KOVACS to win today at the wheel of his SCANIA in this 4th stage. The Hungarian was 2’29 in front of TOMECEK’s TATRA, which had a tire puncture and Noel ESSERS at 2’52. Today’s big looser was Portuguese Elisabete JACINTO which lost 12 min after changing tires twice on her MAN.

Saturday January 4th 2014, the stage will only be 204km. Not that bad as the participants will have a liaison of 578km to go to the Bivouac in Dakhla, right on the Atlantic Ocean shore for a nice resting day. 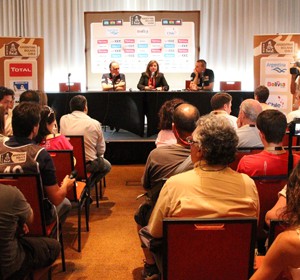 The next season of the Dakar Series will take place over three events spread through South America. With the creation of the Desafio...
Copyright 2011-2016 Rallyraid.net - RISE Network. All Right Reserved.
Back to top