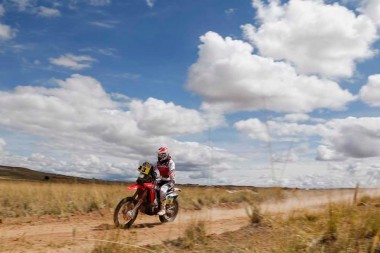 The Rally Dakar left Argentina today and for the first time in the race’s history entered Bolivia. It was Joan Barreda who took the honours in the Salta-Uyuni stage, giving Honda TEAM HRC the fourth victory in 7 days of racing. Hélder Rodrigues finished in seventh place and Laia Sanz twelfth.

Week two of the Rally Dakar got underway this morning from the Argentine city of Salta, in the northern region, heading towards Bolivia, for the first part of the special. Nevertheless, the meteorological conditions were such that the start had to be moved 103 km further up the course to the site of the way-point.

Joan Barreda started at a cracking pace, clocking up the best times in both parts of the the special before arriving home with a 4.03 minute deficit over Marc Coma, the stage runner-up and overall leader. 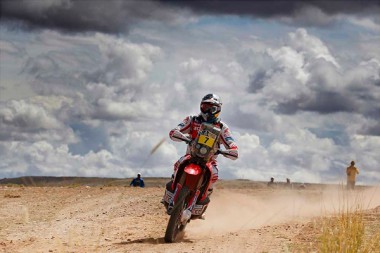 A fine performance too from Hélder Rodrigues in the seventh stage on the Honda CRF450 RALLY, who holds on to eighth overall place. The team’s third rider Javier Pizzolito, made a significant improvement in this stage, always up among the top twenty riders, arriving in Uyuni in 18th, where the riders will be without mechanical assistance, as this is the first part of the race’s second marathon stage.

It was also a day of success for the team supported by TEAM HRC with the new Honda CRF450 RALLY machine. Laia Sanz goes from strength to strength and today recorded some excellent times on the stopwatch. She crossed the line in twelfth place. Her Honda Argentina Rally Team colleague, Pablo González put in a steady performance too. 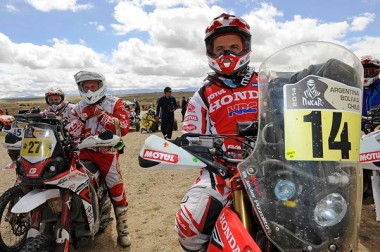 Joan Barreda: For sure I´m very happy about my result. Anyway it was very hard to stay focused. The high altitude made me feel a bit dizzy. Especially when the going got tough in the water and mud of the river.

Helder Rodrigues: In this high altitude I was happy not to worry about any power loss of the motor. The engine with its self adjusting fuel injection worked very fine. Also I was impressed by the bolivian crowd waving flags the last 40 kilometres.

Javier Pizzolito: It was a nice stage which made a lot of fun despite the rain in the first part. Honestly I didn´t expect such  a overwhelming welcome by the bolivian crowd. It was incredible. 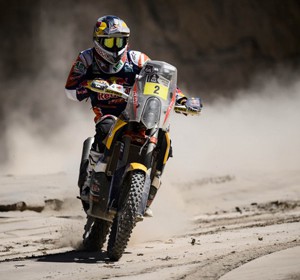 Red Bull KTM’s Marc Coma of Spain finished second in Stage Seven of the Dakar rally on Sunday to continue to lead in the overall...
Copyright 2011-2016 Rallyraid.net - RISE Network. All Right Reserved.
Back to top