Barreda is the best climber, Roma breaks away

In the lead since the start of the rally, Joan Barreda won his second special stage this year and now boasts a lead of more than 13’ over Despres and Coma, the two other beneficiaries of a particularly decisive stage. The car race witnessed a perfect performance by Catalan driver Nani Roma in his Mini, who opened up a significant gap on his rivals, taking advantage of a bad day at the office for Peterhansel and Sainz. 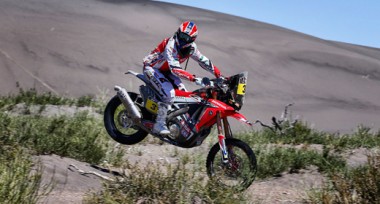 Joan Barreda set a new record today. He became the first Dakar rider to reach an altitude of 4,300 metres on a special stage. This unofficial honour gave him an unbeatable preview of the spectacular landscapes on offer at this height in the Andes Mountain range. Although a keen geographer, it is most certainly the sporting performance he accomplished today that will satisfy the Spanish Rider. Impressive throughout the 243 km of a special stage slightly shortened in order to avoid unstable terrain on the first part of the route, “Bang Bang” again made a big impact, picking up his second stage victory this year after having opened the way for the majority of the day. With a lead of 4’41’’ over Cyril Despres on arrival at the bivouac which marks the mid-way point in the marathon stage, Barreda opened a gap of 13’04 over the title holder. The Frenchman can consider himself to have enjoyed a good stage: 8th in the general standings this morning, he is now the closest pursuer of the race leader. This tough stage has thus revealed the best technicians in the discipline. The day’s leading trio, like the podium in the general standings, was completed by Spaniard Marc Coma, who is 52” behind Despres.

Behind them, Alain Duclos and Chaleco Lopez are still in with a shout, less than 20 minutes behind, but there will already be plenty of disillusioned riders, even before they tackle the evening on their own without assistance. The dream is over for Ruben Faria, who has dropped out of the Dakar after a fall, as well as for Frans Verhoeven, who injured his shoulder. Still stuck 30 km from the finishing line almost two hours after the leaders finished, Portugal’s Paulo Gonçalves lost all hope of final victory and the highest step on the podium will be also inaccessible for Sam Sunderland and Juan Pedrero, who have still not yet finished at the time of writing. David Casteu can still hope for a place of honour, 22’ behind the race leader, as can Olivier Pain, who lies 36’ behind. It will however be very difficult for Helder Rodrigues, relegated to more than an hour of his team-mate Joan Barreda after just 3 stages!

The route to the isolated bivouac in Barréal also proved to be cruel in the quad category, which lost its emblematic champion. Marcos Patronelli was forced to drop out after suffering from dehydration. The hopes for the title have also evaporated for Lucas Bonetto, who was still stuck 100 km from the finishing line at the end of the afternoon. Rafal Sonik has benefitted from their misfortunes, inheriting both the stage win and the lead in the general standings. 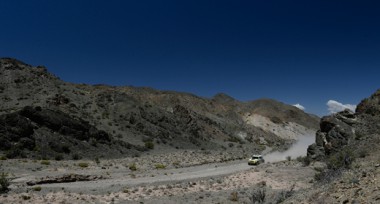 We left the car category yesterday amidst a classic closing of the gaps between the major players in the general standings at San Rafael. Peterhansel, after controlling the stage, sat atop the general standings followed closely by Carlos Sainz, a comfortable second in his SMG buggy. The tracks to San Juan blew apart this hierarchy in which Al Attiyah was waiting to pounce in 3rd place in the general standings. This was due to the perfect stage driven by Nani Roma today. The Catalan just missed out on winning the first stage, but made up for that today, on a different route to the bikes, leaving some of the major challengers for final victory at a distance that was, while not decisive, definitely respectable. Carlos Sainz is now 4th, 12’02” behind and Stéphane Peterhansel lies in 5th, 24’08 behind his team-mate. As a result, the strategic situation has completely changed. Under the gaze of the Aconcagua Mountain, the horizon lit up for many of those harbouring ambitions following the nightmare day experienced by the former general standings leader and his Spanish pursuer. Having taken a deviation due to a swollen river, Peterhansel and Sainz lost their bearings and even more in the case of ‘Peter’ who had a series of punctures. Whilst Nani Roma has made an initial breakaway in the race to Valparaiso, his closest rival is a driver who loves attacking, Argentinean Orlando Terranova, 9’06 behind, whilst Nasser Al Attiyah, another speed specialist, lies 10 minutes away, promising some lively special stages to come.

In the truck race, Andrey Karginov triumphed on arrival in San Juan. This sixth stage victory in his career does not enable the new leader of the Kamaz team to close in significantly on Gerard De Rooy, who leads the general standings, with an advantage of almost 20 minutes over his countryman Marcel Van Vliet. 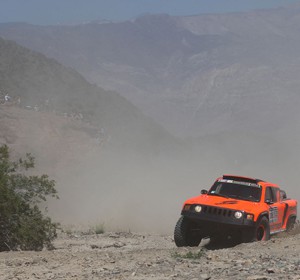