During the breifing of the 8th stage, René METGE insisted on the fact to take the right capes during the whole day.
Some participants applied the hints of the sporting director of the SONANGOL AFRICA ECO RACE, the others who didn’t are still in the dunes.
Here are some words of René METGE concerning this stressful sandy stage in Mauritania :
« I had announced this stage has a harsh one and I insisted on the importance of the capes. In reality, what I expected difficult was quite easy and what I thought would be easy became very difficult. The biggest issue came after CP 3. The participants had to go on a 11° capes and instead they went straight into a very difficult dune field. Some continued during 5km before noticing their error. I then decided to stop the helicopter to show them the way myself. Some managed to get back on the right track, others damaged their clutch and stayed stuck during a long moment and didn’t get back before a long time. As a matter of a fact, the ranks might have several changes.”
Actually it should be the case as at 20:00 local time, 14 cars/trucks and 4 bikes were still not at the bivouac, where the finish was. 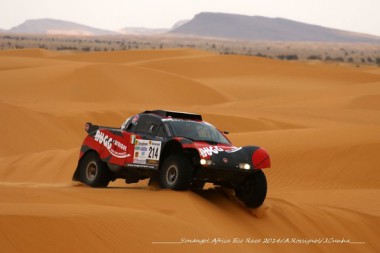 One of those who took advantage of the situation, to get back on the front of the scene, even though he got blocked in the sand, is Jean Antoine SABATIER as he won his 4th stage on the SONANGOL AFRICA ECO RACE.

The frenchman won the stage 1’42 in front of Stephane HENRARD which was not really happy at the arrival of today’s stage : « During most of the day we were behind Jean Louis SCHLESSER and we even got very close to him. We didn’t face any navigation or mechanical problems. When Jean Louis got stuck we finally managed to pass and after that I tried to manage fuel as much as I could to not face the same problem as yesterday concerning fuel. I even thought we were in front. Being too careful was a strategy error and I figured it out when I saw SABATIER arriving, and which started 7 minutes behind us. I’m disappointed to finish second once again. I’m still going to do my very best to win a stage until the end of the race”.

The 3rd place of the day was for Jacky LOOMANS, which once again helped a participant, Yves FROMONT who was stuck. .

He ends the day at the wheel of his Toyota HILUX about 10 minutes in front of Jean Louis SCHLESSER, who lost some time in the sand but not only, the big part of the problem came from the SONANGOL BUGGY itself, one of his hydraulic cylinder blocked in low position.

5th position was for Gintas PETRUS from Lituania and his desert warrior but the most surprising was the 6th position of Mathieu SERRADORI and his little Predator BUGGY, participating to his 2nd rally only.

The big loss of the day started with Balazs SZALAY, which had to abandon due to an engine problem. Michel TURON BARRERE wa 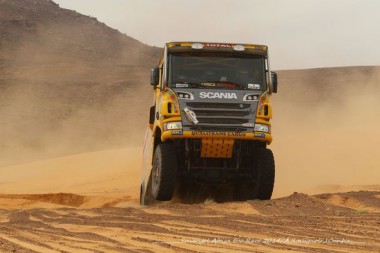 s second of the list due to a hydraulic cylinder issue as well and which made him lose 3 hours. Gilles FLORIN went into the wrong dune field and broke his clutch and also Kanat SHAGIROV from Kazakhstan who is still out in the wild.
In the general rankings, Jean Louis SCHLESSER and Thierry MAGNALDI are still leading with 1h10’02 in front of LOOMANS’s Toyota and 2h42’53 in front of HENRARD and BARBIER, also leading the Open category.

After yesterday’s issues due to sand, Niklos KOVACS from hungary started 4th in the truck category. Even with a smaller top speed on his SCANIA ( 120km/h whereas the other climb up to 150km/h ) the navigation was perfectly managed by Peter CZEGLEDI, KOVACS ends 3rd of the day overall, only 15’45 behind SABATIER. I arrived 20 minutes in front of Tomas TOMECEK’s TATRA and took back 59’59 from JACINTO and her MAN truck. 4th yesterday, the Hungarian is now 2nd just behind TOMECEK 5th of the day. 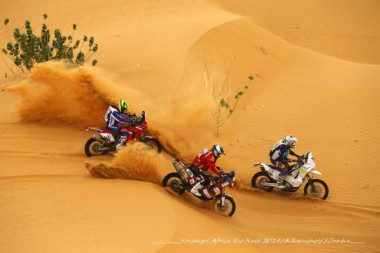 One thing is sure, the SONANGOL AFRICA ECO RACE reveals more and more talents like the Austrian Robert THEURETZBACHER winning his 3rd stage, but also Gwen BACKX 2nd at 7’17 and Joris VAN DYCK, 3rd at 12’57, both from belgium. Behind this trio, Harite GABARI which was injured on the 3rd stage finishes 4th at 14’14 right in front of Michael PISANO at 20’25. Dominique ROBIN gets 13 minutes back of his Corsican rival and Nobert DUBOIS loses all chances to be on the podium ending at 2h18’08 from the first bikes of the day. In the general rankings PISANO stays 1st, 42’27 in front of ROBIN and 1h11’50 on Joris VAN DYCK.

The 9th stage of 309km of which 289km of selective sector between Akjoujt and Toueila will be the last episode of the Mauritanian sand battles. We should have once again some surprises! 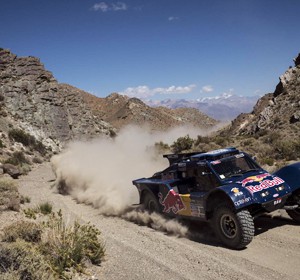 Stage 4 of the 2014 Dakar saw Juan Pedrero take his maiden win at the end of a special which dealt Cyril Despres’ prospects...
Copyright 2011-2016 Rallyraid.net - RISE Network. All Right Reserved.
Back to top