Rally racing legend Carlos Sainz is revved up and ready to go following his arrival in Argentina for the 2014 Dakar Rally. 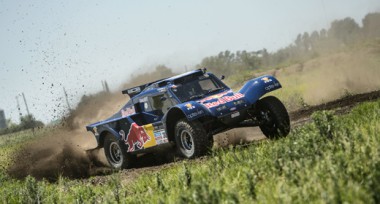 Elite endurance athletes from the world of motorsport have flooded into Rosario for the start of the Dakar Rally on January 5th. Standing out from the pack during the pre-race preparations was former Dakar champion Carlos Sainz as he unleashed his Red Bull SMG Buggy on the outskirts of town.

Carlos and co-driver Timo Gottschalk were back behind the wheel following their vehicle’s transatlantic flight between Paris and Buenos Aires. As soon as Carlos put his foot down and the Buggy sprang into life it was clear that El Matador and his machine were ready to race.

Following two intensive testing sessions in Morocco during the past six months the Buggy approaches the start-line of the Dakar well equipped to meet the challenges ahead. This was in evidence during the final shakedown exercise as the Buggy ripped through the tall Pampas grass in Argentina.

Philippe Gache, Red Bull SMG Rally Team Manager, explained during the shakedown that it was essential for the team to perform the short test in South America. Philippe was also pleased to report that the Buggy was still in the same top condition as when it left Europe.

The next step for Buggy #303 (Carlos Sainz & Timo Gottschalk) and Buggy #312 (Ronan Chabot & Gilles Pillot) will be to pass through Saturday morning’s scrutineering inspection. Once all the technical regulations of the race stewards have been satisfied the team will take part in the pre-race Podium presentation before crossing over the start-line of the 2014 Dakar Rally.

“The car is working exactly as we expected and the same as during the final test in Europe. The main thing was to check that nothing had happened to the Buggy while it was being transported by plane from Europe to South America.”
“With the car responding correctly we are ready to get started. On the first stage we will try to find a good driving rhythm as quickly as possible and then we will see what can be achieved.”

“Even if we didn’t clock up too many kilometres in the Buggy it was still very important to make sure everything was still operating as it should. The Dakar is starting soon so after being in the Buggy today it makes us all calm to know that the car is working as we want it to be.”
“We are confident that we can make a good start to the race and we know that the Buggy is there to give us what we need. We have done everything possible to be prepared for this Dakar but we also know that there will be plenty of surprises along the way.”

“To look around in the morning and see Carlos and Timo in the car with all the mechanics ready to do their job was a great feeling. This team is ready to start the Dakar.”
“During the shakedown everything was normal and that’s good to know but there is no time to feel too relaxed. This is the Dakar and things can change very quickly at this race. What we have done is to make sure that everything that we have control over is exactly how we want it.” 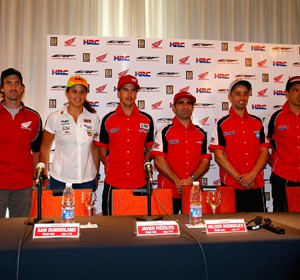 Rosario played host today to the presentation of the official teams, with Honda and TEAM HRC introducing the team that...
Copyright 2011-2016 Rallyraid.net - RISE Network. All Right Reserved.
Back to top