The 2010 Dakar Rally champion is out to reclaim his title following a tough opening stage that proved to be bittersweet for the Red Bull SMG Rally Team.

Carlos Sainz set off on his most recent Dakar Rally adventure as the race departed from Rosario and headed towards San Luis. Carlos was quick to get in tune with his all-new Red Bull SMG Buggy during a fiercely contested first day.

Tight and twisty gravel tracks were not the ideal conditions for Carlos and co-driver Timo Gottschalk but the pair stuck to their task and kept their Buggy in the frame for the top prize.

It was Portuguese driver Carlos Souza and his Chinese built Haval vehicle that were the surprise winners on Stage One but Buggy #303 was hot on their heels to stay just four minutes off the lead.

With Carlos and Timo bringing home the first two-wheel drive car on the stage it’s clear that the duo will have better days to come as the terrain switches from stones to sand. The Red Bull SMG Rally Team are now getting in gear for the grey dunes of Nihuil that will comprise much of Monday’s Stage Two between San Luis and San Rafael.

The news was not so good on Stage One for the team’s other Buggy controlled by Ronan Chabot and co-driver Gilles Pillot. The Frenchmen ran wide on a corner and were brought to a standstill following a collision with a rock. Not in the habit of quitting a challenge, they called in the support truck to make the necessary repairs needed for them to continue.

Ronan and Gilles will now get straight back into the action after bringing their Buggy home on Stage One and epitomising the never-say-die attitude that exists within the Red Bull SMG Rally Team.

Carlos Sainz #303 Driver – Red Bull SMG Rally Team: “The stage was very slow today and that doesn’t really suit me. I’m glad to get a day at the Dakar finished without any problems for the car. Today was not the best conditions for our Buggy and we’re looking forward to the sand tomorrow.”

Timo Gottschalk #303 Co-driver – Red Bull SMG Rally Team: “We had to find a way to adapt to the stage and we needed to do it quickly or there was a risk we could lose time. It was a very challenging stage and one of those that you are just happy to get finished. The stages that we can push on are all still to come.”

Philippe Gache, Team Manager – Red Bull SMG Rally: “For Carlos and Timo to come home just four minutes off the lead on a stage like this is a great result. Our target for the day was to lose the minimum amount of time on our four-wheel drive competitors and we managed to do that. Tomorrow is better suited to our Buggy and our aim is to catch those four minutes back immediately. Ronan and Gilles had a bad day and it’s extra unfortunate that the bad day comes on the first stage of the race. Our target is to repair the car back at the bivouac and send them back into the race tomorrow. From now on their race will be a matter of playing it day-by-day.” 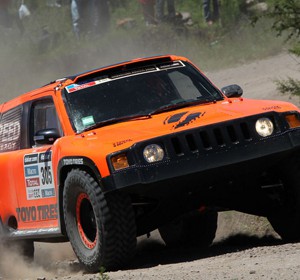 Sunday marked the start of the 2014 Dakar Rally and the debut of the SPEED Energy / Toyo Tires HST Gordini. The stage went...
Copyright 2011-2016 Rallyraid.net - RISE Network. All Right Reserved.
Back to top