Chabot and Pillot’s Buggy does the business on Stage Twelve

The Frenchmen record another top 10 stage finish before taking a special guest on a co-drive over the dunes. 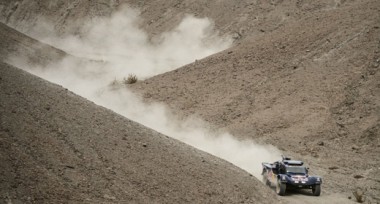 The latest chapter of Sébastien Loeb’s trip to the 2014 Dakar Rally saw the nine-time WRC champion given a ride over the sand in the Red Bull SMG Buggy. At the controls was experienced rally-raid racer Ronan Chabot who has been in red-hot form during the second week of the race.

Before chauffeuring Sébastien over the beautiful landscape of the Atacama Desert there was another challenging stage of the Dakar for Ronan to complete. A 6th place finish on the previous stage for Ronan and co-driver Gilles Pillot saw the experienced duo given a great chance to attack once more on Stage Twelve.

The Frenchmen were able to pick up the pace over the opening stony section of the stage before really letting fly during the dunes at the conclusion of the route. The Buggy that has already driven Carlos Sainz to two stage victories at this edition of the desert classic allowed Ronan and Gilles to keep pace with the fastest cars in race.

The Buggy came back to the bivouac with the 6th quickest time of the day as Ronan and Gilles proved that yesterday’s 6th place stage finish was no fluke. The result on Stage Twelve was this twosome’s third consecutive top 10 stage finish at this Dakar.

The impressive sequence of results has seen a charge up the rankings in the second week for Buggy #312, now sitting in 17th overall with one stage of the contest remaining.

Waiting at the finish-line to congratulate the Red Bull SMG Rally Team pair was Sébastien Loeb who was then invited to jump into Gilles’ seat. With Ronan happy to show off the capabilities of his Buggy over the dunes, Sébastien was given a thrill ride over the sands of the Atacama. By the end of the adventure Sébastien’s curiosity concerning desert racing at the world’s toughest rally-raid had been well and truly satisfied. 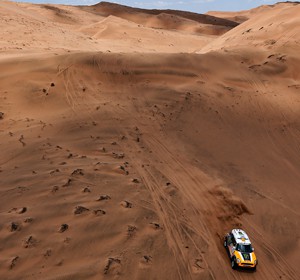 The French pairing Stéphane Peterhansel / Jean-Paul Cottret in the black MINI ALL4 Racing proved to be the quickest in the 350-kilometre...
Copyright 2011-2016 Rallyraid.net - RISE Network. All Right Reserved.
Back to top