Red Bull KTM Factory rider Marc Coma launched his bid for a fourth Dakar Rally title when riders set out on Stage One of the world’s toughest rally on Sunday. At the end of a long day on the KTM 450 Rally bike Coma finished second to Joan Barreda of Spain just 37 seconds behind the leader.

Red Bull KTM Factory rider Marc Coma launched his bid for a fourth Dakar Rally title when riders set out on Stage One of the world’s toughest rally on Sunday. At the end of a long day on the KTM 450 Rally bike Coma finished second to Joan Barreda of Spain just 37 seconds behind the leader.
Coma said he took things relatively easy on Day One, saying: “It was not easy with just a special of 180 km and on the first day of the Dakar you don’t yet really have the right feeling. But I am happy for what we managed today. I took things fairly easy but the race is long and this is just the beginning.”

All four of Coma’s KTM factory teammates were within six minutes of the leader. Chaleco Lopez of Chile was well placed at sixth fastest, trailing only by 3 minutes 24 seconds. Ruben Faria finished eleventh fastest at 5 minutes 11 and Jordi Villadoms was thirteenth at just under six minutes. Riders are competing on the  brand new KTM 450 Rally bike.

Lopez was also satisfied with his ride on the opening day saying it was “‘very technical”. “I’m very happy but it was a long first day with an early start. But I didn’t have any crashes and I have a good feeling for the new motorcycle.” Faria too came away satisfied with Day One: “Today was just a small special but a long liaison. The special was not so easy. There were a lot of turns, left and right and up and down but the bike is great and everything went well.”

At eleventh place KTM Australia’s Ben Grabham was the fastest of the three official KTM-supported riders, trailing the lead time by just 4:50. Kuba Przygonski of Poland came in at twentieth at 8:23 and South African Riaan van Niekerk finished twenty-seventh at 11:14.

KTM Team Manager Alex Doringer was a contented man at the end of Day One. “I’m very happy with the performance of the riders and the bike. Marc and Chaleco were perfect today and Villadoms and Ruben took it easy and used the stage to settle in to get a good feeling. Grabham did a fantastic ride and Jakub and Riaan both finished the day smiling. they are sure then can improve as the rally goes on.”

While riders had a total of 809 km starting at Rosario, Argentina and finishing at San Luis, it was just 180 km in the middle of the stretch was timed special. The timed special sent riders over narrow tracks with challenging stony sections and blind jumps that called upon good concentration and ended in a climb up to 2400 m. The first 20 all finished within 10 minutes of the day’s fastest time, however they all face a bigger challenge in Monday’s Stage Two. They face another long ride of 724 km from San Luis to San Rafael, including 359 km of timed special.

Organizers promise that the first part of Monday’s special stage will be the fastest of the 2014 rally. Then for the last 100 km riders go straight into the grey dunes of Nihuil and will challenge even the most experienced rider and force them to draw on all their technical skills. 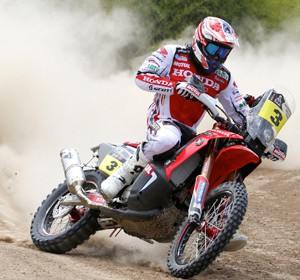 Honda had proved its strength last October with the new CRF450 RALLY, winning both the Morocco Rally and the Merzouga Rally....
Copyright 2011-2016 Rallyraid.net - RISE Network. All Right Reserved.
Back to top