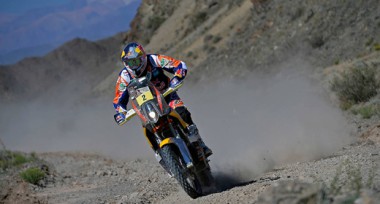 Red Bull KTM Factory Racing riders faced a physically and tactically tough day on Tuesday for Stage 3 of the 2014 Dakar Rally, which saw the team’s most experienced rider, Marc Coma home in third and maintaining third place in the overall standings.

Coma came in behind Stage winner Joan Barreda and old rival Cyril Despres and registered 6 minutes 56 behind the leader. He is currently 13 minutes 04 off Barreda overall lead time.

Next fastest KTM rider on Tuesday was Frenchman David Casteu at number five, followed by Coma’s teammate Chaleco Lopez at sixth. Stefan Svitko of Slovakia and KTM supported rider Kuba Przygonski of Poland finished eighth and ninth to give KTM five of the top 10 places.

KTM Factory rider Jordi Viladoms of Spain was eleventh home, trailing the leader by 21.21 and KTM’s South African support rider Riaan van Niekerk was thirteenth at 28.15. Following the stage, competitors are isolated in the bivouac following the first half of this marathon stage and are not available for comment.

Australian KTM-supported rider Ben Grabham, who delivered two very strong rides in the first stages, came in very late in the stage and he is now is in overall thirty-third place. He and some of the other riders took the wrong valley and had to retrace their tracks to arrive at the finish.

Red Bull KTM Factory rider Ruben Faria crashed and is out of the rally. Faria of Portugal was reported by the team to be okay, but it was a disappointing end to his bid for a top position. He was third overall in the 2013 edition.

Even though organizers decided to shorten the timed special it was still a very big day in the 2014 edition as riders negotiated their way between San Rafael and San Juan. The bikes started at the 130 km point on the original route, making the distance of the timed special 143 km plus 292 of liaison to make up the day’s ride.

Riders also had their first taste of the mountains as they climbed to 4300 meters during the special, traversing on a ridgeline with spectacular views before a sharp descent to the bivouac.

Tuesday’s ride tested both competitors’ technical skills and tactical guile on what was the first part of the first marathon stage. It was not only vigorous physically but they also had to ride smart to preserve tires and bikes for the second half of the marathon. They are not permitted mechanical assistance or new tires overnight.

Speaking after the stage, Red Bull KTM Team Manager Alex Doringer commented: “We knew before the start of this stage that it would be exciting. Unfortunately Ruben had a crash today. He’s been taken to the hospital for a (control) scan but I spoke to him at the medical center and he’s quite okay. Marc did a good job and finished safe, which was the goal. He lost a bit of time but that’s not a big issue. There’s still 11 days to go and we’re quite positive after Stage 3.”

On the subject of tires, which took a beating in Tuesday’s stage and still have to last through another big ride on Wednesday, Doringer said: “We know its true that in the marathon stage its not about winning but surviving. The goal tomorrow is to finish and most of the riders will, because they are professionals.”

Wednesday’s Stage 4 completes the first of the two marathon stages and takes competitors from San Juan to Chilecito over 210 km liaison and a timed special of 353 km for a total of 563 km. The Red Bull KTM Factory Team are competing on the KTM 450 RALLY machine. 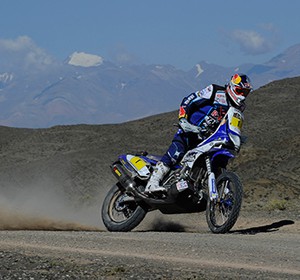 Just when you think the race is starting to settle down the Dakar bites back with a startling series of surprises, with difficult...
Copyright 2011-2016 Rallyraid.net - RISE Network. All Right Reserved.
Back to top