At 08:30 hours this morning, as the crew of the broom truck was plotting the position of bike rider 122 to pick him up, at kilometre 143 on the special of the 5th stage between Chilecito and San Miguel de Tucuman they found the body of the Belgian rider Eric Palante (entrant no. 122).

The circumstances of Eric’s death are the subject of an analysis by the Judge Dr. Massucco of Belen [Catamarca province].

No alert was received by the organisers, and Eric’s water had been replenished in the afternoon.

The rider’s family were told of the accident by the organisation in the morning. Fifty-year-old Eric Palante was taking part in his 11th Dakar and hoped to win the amateur trophy for motorbikes. He knew the race very well, and over the years his enthusiastic but serious approach had made him one of the pillars of the event.

It is with great sadness that the organisers and the entire family of the Dakar offer their condolences to Eric’s family and friends. 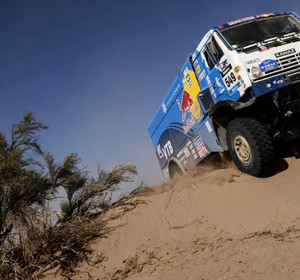 The reintroduction of soft sand saw the temperature rise on the desert trail towards Tucuman. Organisers were forced to shorten...
Copyright 2011-2016 Rallyraid.net - RISE Network. All Right Reserved.
Back to top