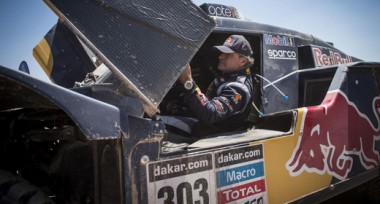 Carlos and co-driver Timo made a strong start to Stage Ten after yesterday’s brave effort to bring the Buggy back to the bivouac with a broken front suspension arm. The first part of today’s stage was contested over dunes and the former Dakar champions were able to demonstrate the prowess of their Buggy over this terrain.

Following the first 231km of the stage it was Carlos and Timo with the 3rd fastest time of the day. However, it was in the proceeding neutralisation section that they ran into trouble. A hurried pit stop to fill up on fuel due to heavy consumption on the dunes saw the pair on unfamiliar ground as they headed towards the second part of the special stage. A crest in the route disguised a sharp lefthander that was missed, causing the Buggy to topple off the road and out of the race.

This final blow for the twosome comes after nine stages of highs and lows at this edition of desert classic. Fantastic wins on Stages Four and Seven were the obvious highlights as Carlos took his tally of Dakar Stage victories to 27 during this trip to South America. Even through the tough times, such as the broken suspension arm on Stage Nine, the spirit to drive through adversity was always in evidence.

A much more positive piece of news came for the Red Bull SMG Rally Team later in the day when Carlos and Timo’s team-mates Ronan Chabot and co-driver Gilles Pillot recorded their best stage finish of the Dakar so far. The Frenchmen also got plenty out of the Buggy over the opening sandy section of the stage to climb up the day’s rankings.

Ronan and Gilles eventually finished Stage Ten as the 8th quickest car between Iquique and Antofagasta. This result moves the experienced duo into the top 20 and also gives them a favourable starting position for tomorrow’s excursion to El Salvador.

Carlos Sainz #303 Driver – Red Bull SMG Rally Team: “I’m really disappointed to be out of the race and it just goes to show that the Dakar is always capable of surprises. We were very short of fuel after the first section of the special stage due to really pushing over the dunes so we had to go and look for some. We left the track to find a petrol station and were then rushing to get back to the start-line for the second part of the special stage. 500m after the petrol station came a bend that was hidden by a crest and we ended up going straight on. We rolled a few times when we missed the corner and unfortunately Timo could not fix the Buggy this time to get us back in the race. In life you never know what can happen and to leave the race this way is really unbelievable.”

Timo Gottschalk #303 Co-driver – Red Bull SMG Rally Team: “This was not an easy Dakar for us with lots of ups and downs along the way. Nobody in the team deserved for our race to end with such bad luck because we worked so hard before and during this Dakar. We missed a tight corner on the way back to the course that caused the Buggy to roll over on its side two or three times. It’s very bad luck for us to end our Dakar like this and I hope we have the chance to put things right next year. The positives we take away are the two stage wins we achieved and the great spirit that exists in this team.”

Ronan Chabot #312 Driver – Red Bull SMG Rally Team: “This was the first day where we had no problems at all so we were able to push and enjoy ourselves. We started way back behind many other cars and also lots of trucks. Over the dunes we were flying past the vehicles in front of us and ended up with a satisfying 8th place finish on the stage. With this result we will have a nice starting position for tomorrow and we are aiming for another positive day. It’s great fun to drive this Buggy through the sand so we are excited to get back on the dunes tomorrow. Carlos and Timo have proven that this Buggy can win Dakar stages so we will try our best to carry on that tradition.” 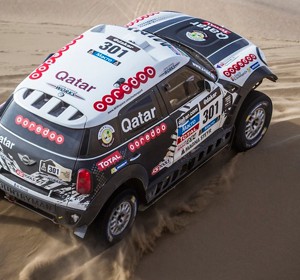 In the 10th stage, from Iquique to Antofagasta, Nasser Al-Attiyah (QAT) and Stéphane Peterhansel (FRA) once again were the only...
Copyright 2011-2016 Rallyraid.net - RISE Network. All Right Reserved.
Back to top