Despres victorious, Nasser and “Peter” on the attack 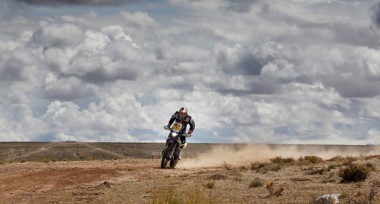 On an 8th stage with a slightly modified route, Cyril Despres picked up his first special stage victory of 2014, ahead of Joan Barreda and Marc Coma, the leader of the general standings who is now closely marking his main rival. This was a tactic that Nani Roma also perhaps attempted in the car category, but having suffered two punctures in a special won by Nasser Al-Attiyah, he lost 8’07 to Peterhansel. However, the Catalan will have the advantage of starting after his rival tomorrow for the first major sandy stage.

Even though the weather conditions prevented the bikes from crossing the salt pans of Uyuni as initially planned, there was no shortage of pizazz during the 499-km long eighth stage, firstly, with the return to the headlines of Cyril Despres. Third to start this morning, the title holder soon caught up with Marc Coma to ride together and gradually rein in Joan Barreda. Despite the Honda rider stepping on the gas at the end of the stage, at the finishing line it was the Frenchman who tasted triumph, 2’10 ahead of Barreda and 2’16 in front of Marc Coma. Behind them, whilst Portugal’s Helder Rodrigues and Frenchman Olivier Pain confirmed the good form of the Hondas and Yamahas with the day’s 4th and 5th places, the day was marked by the difficulties encountered by Sherco! 14’25 were lost by Juan Pedrero, but Alain Duclos again suffered misfortunes, this time a mechanical problem at the start of the stage, leading to a loss of almost 35 minutes.

As a result, in the general standings, although the Franco-Malian is still fourth, he now trails Jordi Viladoms by 21’47 and is under serious threat from Jeremias Israel Esquerre in fifth place 2’56 behind the Sherco rider. In the lead positions, however, no change occurred. Marc Coma, well assisted today by Cyril Despres as an ideal pace-setter, continued to perfectly control his lead over Joan Barreda, which now stands at 38’08. The day’s winner, Cyril Despres moves up a place and is now ninth in the general standings, but trails the leader Coma by 2:23’58.

In the quad race, Ignacio Casale did not have the luxury of controlling his lead, so the Chilean attacked throughout the special stage to pick up a second consecutive victory, his fifth in total on the Dakar and fourth in 2014, 8’38 ahead of Sebastien Husseini and 15’25 in front of Sergio Lafuente. As a result, in the general standings, Casale finally obtains some breathing space, with a lead that now stands at 21’40 over Lafuente and 45’56 over Rafal Sonik. The Polish rider lost 16’04 on the day’s special. 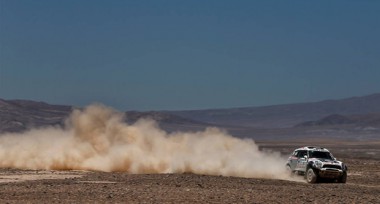 In the car category, strategic moves were also afoot in the 8th stage with its ultra-fast route and only a handful of tricky navigation zones. The main goal of the challengers for the title was to gain a good place for the start of the 9th stage, marked by the first major portions of dunes. Perhaps due to bad luck or a result of such strategy, 2 punctures meant that general standings leader Nani Roma finished fourth today, 9’19 behind the day’s winner. That said, fourth to start tomorrow is possibly not a bad place for the Catalan… This sort of tactic is not available to “Peter”, forced to go on the attack to make up the 31 minutes between him and Roma. This led to the man from Vesoul in France recording the day’s second best time and clawing back 8’07” on the general standings leader, two places in front of whom, however, he will start tomorrow. All-out attack without any care for control was the required watchword for Nasser Al Attiyah and Carlos Sainz, both now forced to aim for stage wins, which led to a very close duel throughout the day, but at the finishing line, the Qatari triumphed, picking up his 18th stage victory on the Dakar, but the first in 2014, 1’12 ahead of Peterhansel and 2’36 in front of Carlos Sainz.

In the general standings, Spaniard Nani Roma thus lost almost a third of his lead and now only has an advantage of 23’46 over Stéphane Peterhansel. Only seventh today, stuck for most of the stage behind the Mini of Russia’s Vasilyev, South African Giniel de Villiers retains third place, but is now 48’25 behind the general standings leader. What’s more, he witnessed Argentinean Orlando Terranova, fourth today, close the gap to within 3’30. 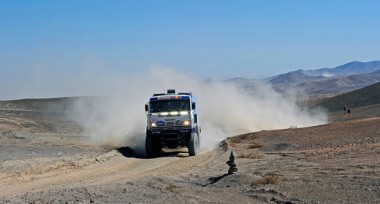 Finally, in the truck race, Andrey Karginov is also trying to put pressure on the general standings leader. He won his second special stage in 2014 and the seventh of his career on the rally, but only e 5’15 ahead of Gerard De Rooy and 6’55 in front of his countryman Dmitry Sotnikov. Yesterday’s winner and therefore first man out today, title holder Eduard Nikolaev lost 14’08 to the day’s winner. In the general standings however, there was little change, with De Rooy unworriedly retaining the lead, 32’35 ahead of Karginov and 1:12’01 in front of Nikolaev. 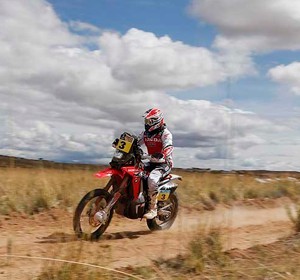 The Rally Dakar left Argentina today and for the first time in the race’s history entered Bolivia. It was Joan Barreda...
Copyright 2011-2016 Rallyraid.net - RISE Network. All Right Reserved.
Back to top