The pilot Elisabete Jacinto won the third stage of Africa Eco Race in the truck category. In today’s special, which took place between Foum Zguid and Assa, the team OLEOBAN®/MAN Portugal was the fastest among the T4 and fulfilled the stage, of 387 kilometres, in 5h17m19s. 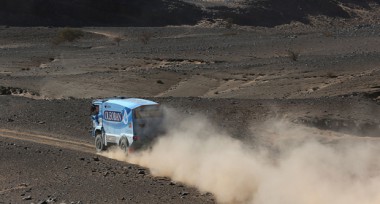 With this result Elisabete Jacinto, José Marques and Marco Cochinho approached the leadership of the class, which belongs to the Czech Tomas Tomecek who was second in today’s stage. The Portuguese are still fighting for the victory on the truck category and will leave for the fourth stage with a difference of only six minutes to the first place. The team OLEOBAN ®/MAN Portugal team is now in the ninth position of the auto/truck standing.

Despite the triumph, the day wasn’t easy for Elisabete Jacinto: “the special was, once again, very difficult for us. Due to the problem in the suspension we did the race with some caution and had to manage it very well so we didn’t compromise our competition. In addition we also had a problem in the four-wheel drive and did most of the race in just two wheels. Close to the end, Tomas Tomecek stopped due to a hole in a wheel and we could overtake him and finish the stage in first place” said Elisabete Jacinto.

Tomorrow is held the fourth stage of the Sonangol Africa Eco Race which will have 390 kilometres of track. In this special will prevail once again, the technical and fast tracks, but the sand won’t be missed. The beautiful Moroccan landscapes will also be a part of the race tomorrow. 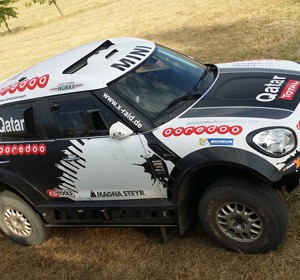 With 12 cars at the Start, including the Minis of Stéphane Peterhansel and Nasser Al Attiyah, X-Raid lines up as the team...
Copyright 2011-2016 Rallyraid.net - RISE Network. All Right Reserved.
Back to top